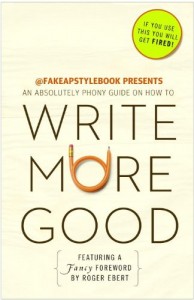 To avoid any possible confusion, “in all fairness” (see chapter 13), “Write More Good” is NOT a sequel to David Sedaris’ “Me Talk Pretty One Day.” Instead it is intended by the Twitter coterie at @FakeAPStylebook as a tongue-in-cheek antidote to the transgressive practices of our 24/7 media that is so galling to both the public and to those journalists who are in fact part of the problem but would like us to think that they can’t really do anything about it.

Their effort gets a mixed review but passing grade. (Who am I but a solo byline, against a committee of more than a dozen wiseasses ready and willing to use their bullying Twitter pulpit?)

As a print journalist with the usual prejudices against both broadcast reporters and the whippersnappers unable to diagram sentences or consult dictionaries, I was perhaps lulled into false expectations by Roger Ebert’s collegial foreword that the authors might join me in Strunking-and-Whiting such miscreants.

Alas, that hope seemed dashed on the second full page of text when the writers used the verb “honed” satirically but correctly, and without irony. (I’m sure they weren’t being ironic because they didn’t say so; see “Punctuation and Grammar,” page 202.) Reporters today seem to forget “hone” means “sharpen,” constantly writing about “honing in” on a target or objective, instead of “homing in.”

But the authors do use their chapters on the journalism trade’s areas of coverage as opportunities to satirize today’s now too-familiar media habits and sometimes offer tongue-in-cheek alternatives. Each chapter also includes a glossary of what are intended to be witty definitions of common journalistic terms.

Some of this stuff is pretty damn good. Still, I wasn’t so sure they were as smart as they thought they were until hitting chapter 3, “Entertainment: The Glitz, The Glamour, the Death of the Superego.” There I especially admired the haiku-like economy of some glossary entries, for example: “Scientology: Our legal department informs us that Scientology is just swell.” Or “Top 40: A cogent argument against direct democracy.”

Do those short quotations reproduced here without permission constitute “fair use” under copyright law? If my reading of chapter 13 (“Media Law”) is correct, I am “so screwed,” and so is Newcity. Sorry about that.

I also might as well confess to being twisted enough to laugh at one definition of “gun” in chapter 10, “Weapons and the Military”: “Hemingway’s lunch.”

That said, I am also Old School enough to admire the inventive use of super heroes to demonstrate verb tenses and to admit that much of chapter 7, which is on technology, flew right over my head. Others too will be sorry there wasn’t a chapter on business “reporting” and will perhaps agree with the book’s advice on covering religion.

Criticism aside, this book will find a ready market among those who hate the media (practically everyone) as well as journalists whose ranks are now vastly outnumbered by Internet bloggers, dabblers and Tweeters who think they’re reporters. Oh, what the hell. It’s only thirteen bucks. (Martin Northway)