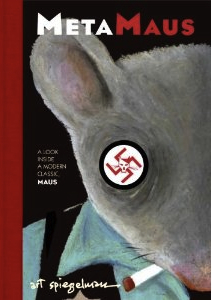 It was a comic about mice, and if it hadn’t been, would anyone have noticed?

When Art Spiegelman began to draw a comic-book serial about his father, a survivor of Auschwitz, he couldn’t have imagined that it would change the face of visual literature. With its deceptively simple symbolism of the Jews drawn as mice and the Nazis as cats, “Maus” became a complex and acclaimed work, helping to usher in the idea of graphic novels and becoming the first comic to ever win a Pulitzer Prize. Twenty-five years after the publication of the first half of the two-volume memoir, Spiegelman sat down with University of Chicago professor Hillary Chute for a book-length interview to explain how, and perhaps more important, why he did it.

Beginning with Spiegelman’s original discovery that his parents had been through the Holocaust, the book follows the development of “Maus” through its conception, gestation and reception. Although on one level it could be seen as a further extension of autobiography, the focus of the book is on “Maus” as a work of literature rather than Spiegelman’s life. In addition to exploring the process behind creating the complete graphic novel—which took approximately thirteen years, from the first installment in the anthology RAW to the publication of the second and final volume—”MetaMaus” also examines the impact “Maus” had on its creator, both positive and negative. Included in the book are interviews with Spiegelman’s two children and his wife, New Yorker art editor Francoise Mouly, on how this very personal work’s public prominence has influenced their lives.

Beyond the 200-plus pages of interviews, the book also contains a wealth of extra material. In addition to the many photos, sketches and art samples throughout the book, an accompanying enhanced DVD contains thousands of sketches, video footage of Auschwitz, an archive of illustrated pamphlets by Polish camp survivors, audio recordings of Spiegelman’s interviews with his late father and—most impressively—the entirety of “Maus” in an annotated and searchable digital format.

Despite the accolades and attention, Spiegelman never loses sight of the most important matter of his work. Perhaps the most powerful four pages in the entirety of “MetaMaus” are the family trees: one showing four vast generations of the Spiegelman family up to World War II, the second revealing not even a dozen lives left after the horrors of genocide.

It was a comic about horror and survival, and if it had never been we would be all the poorer for its absence. (Greg Baldino)