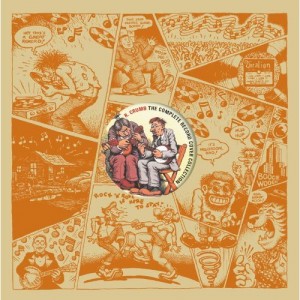 Robert Crumb might have the public persona of a cranky, creepy curmudgeon, but when it comes to music, he enthuses without reservation. That is, of course, as long as it’s his kind of music, which skews toward nearly forgotten blues and jazz artists of the first half of the twentieth century. His cover for Janis Joplin’s Big Brother and the Holding Co.’s “Cheap Thrills” is iconic, and no doubt he could have illustrated the pick of the rock ‘n’ roll litter over the subsequent years had he wanted to. But with the exception of a few things for the likes of the Grateful Dead and Frank Zappa, he’s wallowed in intentional obscurity, which makes this collection all the more valuable. Packaged in an attractive faux-LP sleeve, it gathers every record cover he’s done to date, along with tons of posters and other music-related ephemera (I especially enjoyed seeing the work he made in order to barter: for old records, for plumbing) and an extensive archive of his own equally obscure band from the seventies, R. Crumb and His Cheap Suit Serenaders. “I was an eccentric kid, woefully out of step with my own time,” he writes of his discovery of his music and record-collecting obsession. Though he certainly has not caught up, his time has tried to get in step with him, and we are richer for it. (Brian Hieggelke)