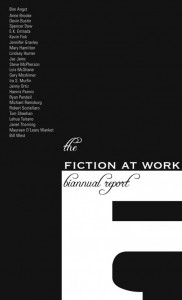 Intermittently fiction tries to reinvigorate itself with new forms. Now we have “flash fiction, ” like what we have long called short, short fiction but imbued somehow with greater urgency, nurtured in the hothouse of the Internet blogosphere. Its products are like watermelons stolen by their writers from odd moments in the workaday world or the humdrum of life.

Tobias Bengelsdorf, in his introduction to a compendium of short works that is the newest print project of Chicago’s Green Lantern Press, makes no apology for his own transgressions against employers, for “Every office I’ve worked in was a den of wasted time and preposterous directives.”

And as with stolen watermelons, flash fiction can be very sweet, including some of these selections gleaned from Fiction At Work’s blog (fictionatwork.com) since its inception in 2007. At their best, they yield unexpected glimpses into other lives. Consider the obsessed infatuation of Spencer Dew’s protagonist in “Customer Service to the Pain and Sleep Department” with a meth addict, though “She’d scabbed over some, was wispy but hard-edged, like a beautiful girl who’d been Xeroxed a few too many times.”

Or, for example, we are left to ponder with Lindsay Hunter (“Frannie”) the need for an adult to manufacture the kind of imaginary friend not considered odd at all for a child; in this case, a troubled sister no less. More meditatively, Tom Sheehan pays homage to “Camp Coffee.”

With only one story per contributor, this palm’s-width, limited edition of “FAW” is a bit of a tease, but author bios will clue you in to where to find other works elsewhere, and of course there’s the Internet. In his introduction, Bengelsdorf might have carped a little less about literary publishing compared with the greater democracy of the Web, especially since this work is a conscious crossover into the print medium to find fresh readers.

“FAW” is also asking for a critical left hook (the reviewer invokes the spirit of Hemingway) by flouting Old School print standards in selecting blindingly small (“hip”?) type on its prefatory page in which the word “intellectual” is misspelled (ouch).

Something of a different quality is achieved in “They Could No Longer Contain Themselves,” a collection of the five finalists in Rose Metal Press’ 2010 flash chapbooks’ contest. The title refers to a common denominator the editor/judges discerned in all the entries: characters “barely contained and bursting out.”

At their best, some individual pieces manifest a thoughtful, haiku-like simplicity, calling forth for this reviewer Annie Dillard’s description of how one glimpses small silver “shiner” fishes in a creek, not by looking at them directly, but sidewise, by catching their reflection in the sun. 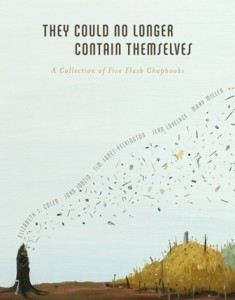 And unlike the fragmentary approach of “FAW,” the net effect of the consciously arranged short works in each chapbook in “They Could No Longer Contain Themselves” is almost symphonic. The results are never cloying or sentimental, however. Tim Jones-Yelvington’s “Evan’s House and the Other Boys Who Live There,” for example, is a candid evocation of the worldview of a boy experiencing homosexual feelings from a young age, individual stories yielding a cumulative effect.

The bitterness about past loves hammered at in the short title piece of Mary Miller’s chapbook “Paper and Tassels” is balanced by a kind of artistic grace, a wise distancing. Yet even in the title piece, there is a poetically staccato recital of images that rises above raw emotions, with that haiku quality alluded to earlier: “He sends you pictures. He is in the bathroom. He is outside. He is in the kitchen. There is a tea kettle, a window, a cloud. There is a hanging lamp made of paper and tassels.”

There is even a “Watermelon,” whose sweetness comes from the concrete recollection of a boy, an untainted memory. It recalls young love for any of us, when you “Feel the pressure build. It builds and builds, like when you love someone so much your heart could burst, your heart could fucking burst under the weight of it.”