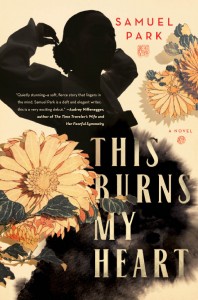 What if?  “Soo-Ja hoped that upon seeing him again, she’d simply feel the expected warmth and surprise you feel when reunited with an old friend—for that’s what he was in the eyes of the world, a distant friend, the kind you run into at weddings and funerals, once every decade or so. But instead, she felt a piercing sensation in her heart, and her breathing became shallow. Soo-Ja could not run to him—if she couldn’t do that before, why did she think she could do that now?”

At the core of Samuel Park’s remarkable debut novel “This Burns My Heart” is his version of an old story, that of the road not taken and its impact on a human life. But young, bright, ambitious Soo-Ja has to make a choice critical to her future within the patriarchal culture of 1950s and 1960s South Korea, wherein it is almost impossible for a young woman to backtrack and take another turn.

“Why are we asked to make the most important decisions of our lives when we are so young,” she mourns later, “and so prone to mistakes?”

To us Westerners, the confining customs of Park’s parents’ generation are almost impenetrable, but the author teases them apart for us in a very natural way, so we acquire a more internal understanding. He lays words to paper with the deftness of a skilled watercolorist; we share growing outrage and sympathy for a woman who deserves better but who cannot escape the snares of her culture, including how those who most benefit from it rationalize their treatment of others.

Soo-Ja refuses to be a victim. A wife and mother, she endures the disloyalty of her husband Min and the rapacity of her in-laws but manifests a strong grace, “chamara,” what we might call grit. Nonetheless, her story scorches our heart.

In the process, Park puts the lie to the Western notion of Asian inscrutability, particularizing his people as individuals and distinguishing them as a group from other Eastern nationalities. Koreans, he observes, “moved their bodies extravagantly, used them like punctuation marks, with arms rising, and fingers freely pointing in the air for emphasis; they were like a country full of excitable preachers gesticulating to congregations of one or two listeners at a time. They weren’t quiet at all; in fact the opposite: temperamental, given to passions, sentimental to a fault.”

“This Burns My Heart” puts a human face to history, demonstrating the searing effect of rising expectations for freedom and prosperity within a nation ruled by a regime autocratic in substance but paying lip service to change. For those under such rule, the America that was their wartime ally is a bright hope, a magnet for emigration.

In the achievement of this book, Park does his parents—especially his mother—high honor. As a male author, he shows great love and understanding for the opposite sex. His book bears the hearty endorsement of Audrey Niffenegger, whose novel “The Time Traveler’s Wife” manifests a similar uncynical acceptance of her own male protagonist.

In the face of the cold analytics of “gender studies,” such heartfelt appreciation of the opposite sex in art is all too rare today. Note that both Park and Niffenegger are on the faculty at Columbia College Chicago. One suspects some secret ingredient in the cafeteria food there; maybe it’s simply the milk of human kindness. Whatever, we can all use a dose: Park’s new book is just what the doctor ordered. (Martin Northway)