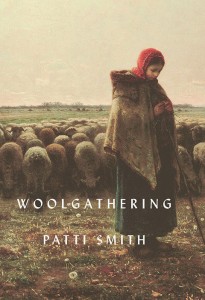 Patti Smith has garnered plenty of critical acclaim over the past year for “Just Kids, ” a memoir of her friendship with Robert Mapplethorpe, but she also quietly published another slender remembrance—”Woolgathering.”

At less than one-hundred pages, with Smith’s own photographs interspersed like religious relics, “Woolgathering” reads like a path through a dream, or the remembrances of a priestess. But Smith claims, in a charming introduction, that it’s truth, not fairy tale. She also endearingly writes that she hopes the book will impose a “vague and curious joy” on the reader, which is a fairly accurate way to describe how the book is absorbed.

“Woolgathering” is how Smith names the process of collecting materials for her art. The woolgatherer is thoughtful, examining carefully, searching, intent on their craft. The book jacket, featuring Jean-François Millet’s “Shepherdess and Her Flock,” speaks to the romantic Barbizon notion that the shepherds and shepherdesses that tend the fields and livestock are more in tune with the earth, and in closer commune with God. It’s easy to understand why the multifaceted artist Smith would find such a sentiment appealing.

Smith’s writing is exquisite, full of great tenderness for her family and her ancestors. “Marguerite Williams, my mother’s mother, played the mandolin. By all accounts she was a happy little thing, though afflicted by a madness, and she died alone in an asylum.” There’s an entire novel in those sentences. What would be transparent name-dropping in the hands of a less-capable celebrity writer is matter-of-fact here—Smith tells a lovely story and just happens to mention her friend Sam Shepard, or Paul Getty.

“Woolgathering” is completely earnest, and the complete lack of irony and humor, so common in today’s literature, is at first disarming—is this for real? But one surrenders, and enjoys each little page of text with a vague and curious joy, a gift from an artist whose trade is words. “Looking up, clouds form and reform. They resemble—an embryo, a departed friend resting horizontal. Or a great arm, compassionate as a spring, that if so ordained might reach and take up that linen sack and all gathered within, if only but the soul of an idea—the color of water, the weight of a hill.” (Kelly Roark)