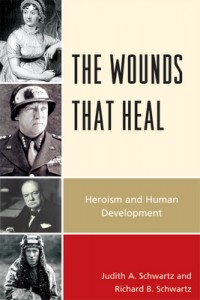 Like the Cowardly Lion in “The Wizard of Oz, ” we modern human beings can all use a little courage. In fact, Judith A. and Richard B. Schwartz argue in “The Wounds That Heal” that the need for heroic role models “is so strong that the media will manufacture pseudo-heroes in order to meet it.

“The hero exemplifies traits and demonstrates capabilities… (that) we value,” they write. “He or she extends our conceptions of the possible and helps us to focus on that which is essential rather than peripheral.”

Unfortunately, when we lack true models, we may mistake celebrity for heroism and as humans aspire to notoriety rather than real virtue and character. “The Wounds That Heal” offers guidance out of this particularly modern mess.

Although author Judith Schwartz brings psychological expertise and husband Richard his background as an English professor to what could have been a strictly scholarly exercise, they write that their book also “is designed for self-help and awareness as well as for personal inspiration.”

In this they succeed in spades, expanding our understanding of heroism from the narrower classical definition of godlike physical courage and related attributes to more human examples of all sorts of outstanding achievement, excellence which many of the rest of us may reach by dint of hard, perhaps courageous, effort.

Modern schools of psychology have proposed that healthy human development occurs in certain “normal” stages, yet—the authors demonstrate—very many successful heroes have begun life with deprivations and in “abnormal” circumstances that might have fatally incapacitated others.

Should we not then, the Schwartzes suggest, “adjust our sense of authentic and meaningful human experience and pay a bit more attention to the EXCEPTIONAL and a bit less attention to the ‘normal’? The ‘normal’ are seldom our heroes.”

In inspiring fashion, they explore the personal biographies and fame of such well-known figures as General George S. Patton, Sir Winston Churchill and T.E. Lawrence (“Lawrence of Arabia”), but in interrogating the character of heroism they also venture into a broad span of literature and accessible popular culture, such as modern film.

Their vision is sufficiently broad to include examples such as English author Jane Austen. Although Austen suffered no horrible deprivation as a child, after the death of her father she became dependent on a stepfather and then a brother for financial support. Yet she refused to bow to pressures of the time to make a marriage that would have compromised the development of the writing art that was her great love.

“…Her decision to decline a proposal and remain unmarried was a studied and conscious one,” the authors write. “In the end, she sought love rather than comfort; she chose spinsterhood over loveless security, and happy obscurity over unhappy prominence.” Without Austen’s unique heroism, we might lack the legacy of her great dramatic—and quite realistic—inquiries into her life and times.

Austen’s novels, the authors write, project “a world with little tolerance for moral relativism. It is a world with codes and expectations and its resonance suggests that we have been hungering (at least to some degree) for the advantages of such a world.” No wonder the desire for heroic models never goes out of style.

The Schwartzes have added brief biographies of heroes suggested by their own students; these would have been improved by closer attention to the subjects’ adversities—for example, Theodore Roosevelt’s determination to overcome childhood frailties. No matter—they nonetheless add to the Schwartzes’ valuable stock of inspiring material. (Martin Northway)

“The Wounds That Heal: Heroism and Human Development”
By Judith A. Schwartz and Richard B. Schwartz
University Press of America, 212 pages, $30.50