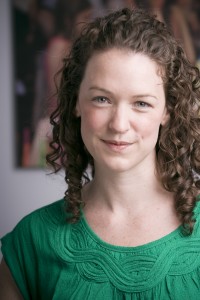 Any woman could tell you how much easier it is to pick up guys—well, usually, let them pick you up—than it is to befriend a girl. Obviously, bars aren’t a good spot for searching out new best buds. But—maybe more than women wish to admit, or guys might believe—even places that seem almost overflowing with potential besties can end up feeling like friend deserts.

Childhood friends who lived on your street now live halfway around the country; college roommates stayed and you moved, or vice versa. Work, bars and the gym aren’t breeding grounds for best-friendships the same way recess, camp and drunken walks home from frat parties were earlier in life. But few women talk about the challenges of making friends in the adult world, worried they’ll be seen as losers, or unappreciative of the friends or significant other they already have. Never mind that it’s fine to talk incessantly about the lengths you’re going to in order to hunt down The One.

When Rachel Bertsche realized that her feelings of girlfriendlessness were making her feel lonely and leaving her unwillingly sitting in front of the TV on Friday evenings, she decided not only to start talking about it, but to make some drastic changes in hopes of recruiting some new, local girlfriends.

Bertsche, a Westchester County native who moved to Lincoln Park when her lawyer husband got a job at a Chicago firm, made a resolution: To go on one lady-date every week for a year. In the fine tradition of Julie Powell of “Julie and Julia” fame, the Medill grad started a blog about her project, nabbed a book deal and, according to Chicago magazine, got her story optioned for television. 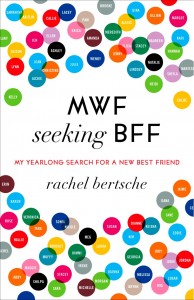 Bertsche’s adventures in making friends—through friends of friends, group activities, online networking and the like—are inspiring (and so, necessarily perhaps, not particularly weird or startling). While there are some duds, most of the people Bertsche meets are equally excited to be connecting with others, and some of them she feels will become close friends over time.

Bertsche, who was a producer for Oprah.com and an editor for O, The Oprah Magazine while embarking on her friend-making project, comes full of inspiration for people to just get out there and approach someone. So long as you can get past the self-help statistics on why making friends is good for your health, “MWF Seeking BFF” may give you that little push you need to actually ask another woman if she wants to get coffee with you sometime, or finally get around to texting that one woman you met through a mutual friend but never followed up with.

Bertsche herself gets more personable over the course of the book, and watching her transformation from anxious and overeager to laid-back and friendly, it’s easy to see that part of what was holding her back from reaching out and connecting with people—on both the surface-level and to a deeper extent—was her own dissatisfaction, unhappiness and unwillingness to engage. It doesn’t make her likeable. But once she commits to her friend-making project, she slowly forces herself to become more outgoing, and in the process, she becomes more of the kind of person you might actually want to be friends with.

More than showing how easy it is, Bertsche shows that making friends is tough work, but worth it. At twenty-eight, some potential friends in the plus-or-minus-five-years range are too involved in their babies, while others, she feels, are still stuck in college life. She learns that some people are just terrible at making plans, others are flaky and neither needs to be a total deal-breaker.

Plus, some people might not share her passion for television (I don’t, and I can’t imagine putting up with her “Friends” references for much more than a few hundred pages) or her upbeat attitude (I love a little more snark in my friends). But, Bertsche says, we don’t need to be friends with everyone—we just need to find that small group of close friends who we really do click with. While her claim that the cash spent on hanging out with friends—at places like Piece, Gilt Bar and Orange, or the mani-pedi salon—is worth it, if it leads to a bosom buddy, one hopes that it’s possible to make new friends without a $10 Appletini or $30 pink toenails.

Maybe Bertsche’s readings, which are sure to attract other friend-seekers, are a good—and free—place to start. And if the self-help turns out not to be your cup of tea, it’s likely there’ll be someone else there who shares your point of view and wouldn’t mind ditching to grab a Schlitz with you instead.