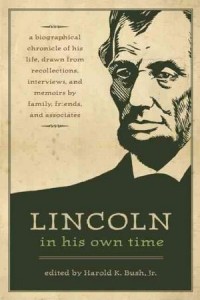 Harold K. Bush, Jr.’s “Lincoln in His Own Time” is a graceful, worthy addition to the already-massive wealth of Lincolniana. It brings a valuable perspective and literary flavor to a table already yawning with historical fare. At a well-organized just-under-300-pages, it is an accessible ying to the yang of Michael Burlingame’s recent exhaustive, 2000-page “Abraham Lincoln: A Life.”

Bush is an English professor at Saint Louis University, and his particular strength is in identifying and reproducing selections that, in addition to humanizing Lincoln, have literary interest. The collection includes several pieces almost lost to modern readers that are enhanced by the editor’s extensive introduction and knowledgeable prefatory notes.

The selections offer perspectives contemporaneous or nearly so, and one impression that emerges strongly is how quickly after Lincoln’s death in 1865 the mythos so familiar to us emerged, and how they were formed not at a distance but from the thoughtful impressions of many observers who knew the man well.

It is refreshing, too, to read some of the first-person building blocks of the familiar Lincoln biography. Take the memories of John Hanks, who remembered that as a youngster in Kentucky his second cousin Abraham was known “as a bashful, somewhat, dull, but peaceable boy; he was not a brilliant boy, but WORKED his way by toil; to learn was hard for him, but he walked slowly, but surely.”

This same Hanks was also living in Illinois to witness his kinsman’s transformation from an able rail-splitter and wrestler into a young man who, at barely twenty-one and not a candidate, “beat to death” a local politician in a completely extemporaneous stump speech. It is the kind of strong early impression seconded by other eyewitnesses here.

Some largely unknown words of Lincoln—including a remarkably good poem published in the Quincy (Illinois) Whig in 1848—are also included, but his distinctive voice rings throughout, recollected by friends and acquaintances recounting both speeches and anecdotes. There are some brief but revealing autobiographical notes, as well as letters after Lincoln’s death by his wife, Mary Todd Lincoln, denying his law partner William H. Herndon’s assertions about Lincoln’s lack of religiosity and the existence of a prior love interest to Mary.

Lincoln was the best presidential writer, and Bush is interested in how the power of his words and the consistency of his messages helped shape the modern “civil religion” of American government; for example, Lincoln firmly established the Declaration of Independence beside the Constitution as our foundational document.

Bush acknowledges that Lincoln was by no means universally loved, even in the North—not to mention in the seceding South or border states—lampooned as oafish by critics and depicted as “ape-like” in cartoons. But there is not much here challenging today’s prevailing hagiography surrounding the martyred president.

That said, the evidence that Lincoln supported colonization of blacks to Africa may shock some readers. He simply did not believe that, after emancipation, most blacks and whites could live peaceably side by side. He told African-American leaders in a frank 1862 meeting (whose transcript appears here as “Lincoln’s Colonial Scheme”), “But for your race among us there could not be war, although many men engaged on either side do not care for you one way or the other…. It is better for us both, therefore, to be separated.”

Statements such as this have been underlined by some modern-day anti-Lincoln polemicists as proof that he was a racist. There’s plenty of evidence showing that for most of his life Lincoln believed that blacks were innately inferior to whites; in this view he did not differ from most educated whites of his time, North or South. Yet, from his earliest exposure to the institution of slavery, he never believed the supposed inferiority of blacks justified enslaving them, and he consistently opposed the practice.

Moreover, evidence also suggests that he changed his mind about the intellectual potential of African Americans; his exposure to the formidable intellect of Frederick Douglass clearly was pivotal. Douglass’ evolved friendship with Lincoln similarly persuaded Douglass of the moral potential of whites. In an 1865 speech reproduced here, Douglass said, among other observations, “I saw him mostly alone, but… he was one of the very few (white) Americans, who could entertain a negro and converse with him without in anywise reminding him of the unpopularity of his color.”

Having served briefly in the pro-Confederate Missouri State Guard as a young man, Samuel Clemens—the author Mark Twain—recalled in a 1901 speech (excerpted here) that “The hearts of this whole nation, North and South, were in the war. We of the South were not ashamed of the part we took. We believed in those days we were fighting for the right… for we were fighting for our sweethearts, our homes, and our lives. Today we no longer regret the result… The old wounds are healed, and you of the North and we of the South are brothers yet.”

In adding his own voice to preserving Lincoln’s Kentucky birthplace, Twain suggested that perhaps only a man of Border State sensibilities could have preserved the Union, one “who knew how human all the parties to the quarrel were, how much alike they were at bottom, who saw them all reflected in himself, and felt their dissensions like the tearing apart of his own soul.”

There will always be those who find fault or blame for Lincoln, but Twain’s is a fitting epitaph for the flawed but earnest man who came to embody the deep tragedy of the horrible war he barely outlived. (Martin Northway)

“Lincoln in His Own Time: A Biographical Chronicle of His Life, Drawn from Recollections, Interviews, and Memoirs by Family, Friends, and Associates”
Edited by Harold K. Bush, Jr.
University of Iowa Press, 296 pages, $25