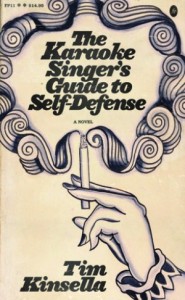 Three estranged siblings gather at a funeral parlor in fictional Stone Claw Grove, Michigan, to mourn the grandmother who seemed to find a solace in the hometown that the siblings could not. A man struggles to live outside his father’s shadow after he inherits a nightclub from the old man. A teenage runaway comes to grips with her life as a noir cliché. A preteen copes with puberty in the dilapidated apartment of his guardian.

At its core, Tim Kinsella’s “The Karaoke Singer’s Guide to Self-Defense” is a pretty straightforward Small Town Lives novel: a lot of characters facing obstacles, both internal and external, with the town itself seemingly the biggest among them. You’ve seen this sort of thing before. It’s “Winesburg, Ohio.” It’s Willa Cather. Heck, it’s “Garden State.”

What sets one of these works apart from the rest, what makes a Small Town Lives novel live or die, are the characters that populate it. And fortunately, Kinsella peoples his novel with more unique characters. He also brings a ton of ambition to the work, and a level of mastery that makes it difficult to believe this is really his first novel. Make no mistake about it: this is a damn impressive debut.

Like most entries into the subgenre, the plot isn’t all that important. It’s really just an excuse to get all the characters together so we can start examining their lives. Here, that spark is provided by the aforementioned funeral that puts the three primary characters in the same room as each other for the first time in years. We have Will, the youngest sibling, who is working his way through a twelve-step program to deal with an addiction to fighting. Mel is the middle sibling who has worked for years, as a stripper and bartender, at the Shhh…,, a grimy nightclub in their hometown. The eldest, Kent, has the best life on paper—a shift manager at a factory, a family, et cetera—but he carries what are likely the rawest wounds of an abusive childhood.

The supporting cast consists of people whose lives intersect with the three primaries. Kinsella shows a great deal of range as he unpacks each of them with the same level of care and detail as the siblings.

All, beautifully rendered, are united by what seems like the overarching theme: “Remembering is nothing,” a character muses. “Finding one’s own effective means for forgetting was the cornerstone of a life worth making oneself cozy within.”

They try so many ways to forget: drugs, alcohol, fighting, displacement, TV, sex. But Stone Claw Grove, as the fictional town’s tongue-in-cheek name suggests, has a strong hold on them. Even those who have managed to physically leave it behind, like Kent and Will, are still emotionally in its grip.

In spinning this yarn, Kinsella employs a striking array of modern, postmodern and more traditional tools. His story is reliant on multiple points-of-view and each voice is distinct, compelling and well-executed. Since most of the novel is about what happened to these characters in the past, he also finds himself moving us up and back along a lengthy timeline. Sometimes he simply brings us there. But in others, he’s fond of these interpolative little flashbacks that read almost like independent short stories. In a few instances, he also breaks the narrative to deliver character development in the form of online dating and Myspace profiles.

Although it lends appreciated comic relief to the overall brooding novel, the latter might prove a little too cute, a little too clever, for many readers. As will the numerous pop-culture references, some of which work nicely, but others—characters deconstructing “Under Pressure” line by line; a reference to the film “Fight Club” right around the time Will joins something suspiciously similar—seem either gimmicky or a bit too self-aware.

But this is a novel with only minor hiccups. Most of the time, it’s gripping. On a number of occasions, it’s shit-your-pants brilliant. Kinsella, who has been a principal member of a number of Chicago bands (notably the mathy emo outfit Joan of Arc and Cap’n Jazz), is already something of royalty in the Chicago indie music scene. Consider “Self-Defense” the first entry in a case for similar esteem in indie lit. (Eric Lutz)