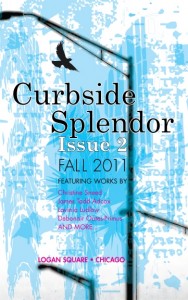 Startups in the teeth of a recession are risky, and new publishing ventures especially so; hence, the premiere of the ambitious, earnest semiannual literary journal “Curbside Splendor” should be applauded. Originating online but based in Logan Square, it is a “city” magazine edited by Victor David Giron that casts a wider net, with stories ranging out into suburban and even exurban interests.

Karolina “Koko” Faber’s design creates an urban and urbane showcase for the stories and poems set beside striking, complementary photography by Garett Holden, Faber and others. It is a journal likewise proud of its writers and poets, placing brief bios in front of their works instead of relegating them to the back of the book.

Issue 1 includes winners from Curbside’s Winter 2010 short-story contest. Brandon Jennings’ first-place flash-fiction piece “Doc the Fifth” draws its power from the immediacy of its description of the Iraq War. Stories in both issues vary from generally straightforward narrative to the near surreal, like James Greer’s “Second-Hand Blue” in Issue 1, which demands and rewards close reading.

The more accessible “Close, Personal Friend” in Issue 2 is further proof of the growing talent that made Christine Sneed’s collection “Portraits of a Few of the People I’ve Made Cry” a winner of the Grace Paley Prize in Short Fiction.

Tending a child with a challenging physical malady strains a couple’s relationship in James Tadd Adcox’s “Some Examples of Things That Are Not Metaphors” (Issue 2), but the author does not overbearingly point a finger of blame at the wife who threatens to bail on the family. Rather, Adcox’s vivid portrayal of the boy’s odd world and sensibilities clarifies the father’s deep affection for his son.

The story experiences a minor bump when the boy’s age fails to drop in moving backward chronologically from one paragraph to the next, a lapse an editor should have caught. Selecting quality stories from multiple submissions, arranging them and preparing them for press is demanding work, but an editor’s job does not end there. Occasionally here, stories need a little more help, from spelling to punctuation.

During the past decade or so, there has been a growing tendency for writers to carry the colloquial voices of characters into narration, often resulting in bad grammar and syntax, misplaced modifiers, dangling participles and the like. Sometimes editors simply need to rescue their writers from inadvertent howlers.

More substantively, some stories would have benefited from tightening, including the editor’s own endpiece story in Issue 1. But from such good beginnings, there is time to improve and fix such stuff.

But then there’s the poetry: a variety of voices, whose general common denominator is a lack of pretentiousness. Try finding a litmag with that quality! Read “Curbside Splendor” now, and grow with it. (Martin Northway)