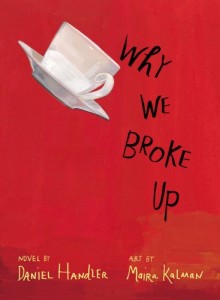 In “Why We Broke Up, ” Min drops a box of objects on her ex-boyfriend’s doorstep to explain their incompatibility.  Their brief love affair exemplifies the universal pathos of young love and heartbreak.  Inspired readers are encouraged to visit the companion tumblr and leave their own break-up story.  We recently spoke with Daniel Handler (also known by his pen name Lemony Snicket, which he used for young adult “A Series of Unfortunate Events” books) and illustrator Maira Kalman about young-adult literature, being ready for sex and the hooker scene in “The Catcher in the Rye.”

This book really challenges the YA genre—did you have an audience in mind when you were writing it?
Handler:  People who are interested in heartbreak.
Kalman: I never paint for an audience, because I think it has to be universal. The people who are there will get it, no matter what age they are.

Then what makes this a YA book?
Handler:  I don’t know. I don’t understand it. I like to think of children’s literature as a kind of genre, rather than an audience. It’s almost like it’s misnamed, because it doesn’t indicate a readership. We did a picture book together and they always say that picture books are for very young children, which always cracks me up because they don’t buy them and they don’t read them, they have them read to them, they’re read by adults. Picture books are thus a genre, where we kind of pretend they’re for young children. When I was writing “A Series of Unfortunate Events,” I thought that children’s literature was a genre and there were some guidelines for it, but I didn’t think, “What do eleven-year-olds like?” With YA I’m more puzzled. I was on the committee for the National Book Awards for Children’s Literature, which is mostly YA, so I read two-hundred-something YA novels, and they had nothing in common except they were called YA. They were all sorts of things, and some of them seemed like you would only like them if they were young, maybe.
Kalman: So we’ll start with YA and then go up from there…
Handler: Or maybe YA and before. It’s like Seventeen magazine—you want to read about high school before you’re in high school. Because you’re excited about it and you want to read about it. While you’re in high school, you don’t have an interest in it. Although, many people who are in high school have been coming to the events, so… so much for that theory.
Kalman: There it is: It’s a book for we don’t know.
Handler: We have no idea what we’re talking about. That’s only the first question and we’ve already revealed we know nothing.

How did you choose the images and collaborate?
Kalman: We had worked together on another picture book in the more classical way, which Daniel wrote and I illustrated, but this time Daniel thought it would be more interesting to start with the world of objects and see what would happen from there. So we went to my studio and looked at many different objects, things that I collect, from three-dimensional objects to two-dimensional objects. To one-dimensional….
Handler: What’s a…
Kalman: I don’t know… I collect combs and…
Handler: She showed me many of the things she wanted to paint, and the things that intrigued me the most were ordinary objects. There are two things that make ordinary objects look magical. One, is that they’re painted by Maira Kalman and two, is that they’re infused with memory. And so, an ordinary object that may look like a battered water bottle, can become an icon of one’s many travels. So it started with that. What makes objects magical? I thought: tokens of a love affair.

I was really disappointed when I found out that Hawk Davies is not a real musician and all those movies…
Kalman: Because you want to go see them because they’re so amazing! You want to see them, you want to listen to the music…

It seems like it would have been easier to choose movies that already existed…
Handler: I actually think it would be more difficult to choose movies that already exist because everybody has an opinion about them, so they bring their own baggage. When I was reading all those books for the National Book Award I would read something like, “She was the kind of girl who listened to a lot of Coldplay.” And I thought, in one high school, that would mean she’s really cool, and in another high school she isn’t. So if you make something up then Hawk Davies sounds like the kind of jazz you like the best.

Is there an intended morality tale in this story?
Handler: Morality?  Maybe mortality.
Kalman: I want to answer it as the reader of the book and then the author might have a thing or two to say. But, I think it’s more about courage, about knowing what it is that you really want, and doing it, and then figuring out if it’s the right thing for you, and then undoing it, or leaving it, as opposed to being a victim or passive or angry or existentially unable to do anything. It’s not about morality, it’s about optimism and integrity.
Handler: What would the morality be about? Sex?
Kalman: There’s no punishment for having sex in this book.
Handler: There’s punishment for love but that’s inevitable.
Kalman: There’s pain for love. It’s very moral. There’s ethics in it, but that’s different.
Handler: I get tired of the notion that you should be ready for sex, because you can’t be ready. When they say, “Make sure you really love the person before you have sex with them.” It’s like saying, “You shouldn’t travel to outer space until you’re ready, until you really know what that’s like.”
Kalman: One lives to make blunders. You have to do all that stuff, otherwise you’re not living.

At the end, Min gets into a shame spiral, and it took me right back to being sixteen years old again. How did you get into the head of a sixteen-year-old girl?
Handler: I think that kind of rant is universal, I don’t think it’s limited to sixteen-year-old girls. There might be specific things that sixteen-year-old girls are more likely to feel that way about, but I think everyone has that feeling where, “There’s nothing that I’m doing that’s anything at all. It’s all facade or desperation or clumsiness.”

What YA books did you like when you were young?
Kalman: When I was young, there were no YA books. Camus. Truman Capote—it was what we were reading… bleak existentialists.
Handler: Cocktail parties?
Kalman: Having martinis… We were just reading books. Probably that we didn’t understand.
Handler:  “Mrs. Caliban” [by Rachel Ingalls]… “The Master and Margarita” [by Mikhail Bulgakov].  Maybe those are YA. We’re talking with McSweeney’s about a YA reprint line of novels like that that you’re going to love when you’re in high school, but not what anyone thinks of as YA. When I was in high school you were just a reader, there wasn’t a lot of literature that was designed for…
Kalman: It wasn’t a category. Was it?
Handler: I think there was a tiny category, but it was designed for reluctant readers. So if you weren’t a reluctant reader, you just read whatever you wanted. Novels about high school that I read when I was in high school I thought were stupid. Like, “Catcher in the Rye” drove me nuts.
Kalman: It was too far away from me.
Handler: I thought, Really?  He’s turning the hooker away?  You would freak out, but afterward… You would go through with it and then you would say, Oh my God, what have I done? But you wouldn’t be like, Oh, no! No… That’s for girls.

And how about YA authors today?
Kalman: I have no idea, I’m out of the loop.
Handler: I like Adele Griffin a lot. I like John Green. When I was just at ALA [American Library Association conference], librarians were asking me, “What books would you give boys to read?” I had just read this crazy El Salvadoran novel called “Dances with Snakes” [by Horacio Castellanos Moya] about this man who gets angry and has these two snakes, and the snakes are going around murdering everybody, and it’s a very violent, kind of hilarious book, and the second plot is this police procedural, where the police are saying, All these people have been killed with snake bites… and I thought, when I was fifteen I would have loved it. It’s violent and filthy and really, really weird. And so I said, “This is what boys should read, you should find this novel.” And, that’s not what they meant, of course. It started me on this rant where I was saying, “If you really want boys to read—Filthy would be great.” If that’s what you’re dedicated to, you want every fifteen-year-old boy to leave the library with a novel, you should line up all the filthy novels on a shelf.

What’s been the reaction of fifteen-year-old boys to “Why We Broke Up”?
Handler: I’ve had the same conversation with about a dozen boys who are like, Finally there’s a book that shows that girls get upset over perfectly natural things. They perfectly understood what went on and said, “That’s exactly true—and then the girl freaks out.”
Kalman: Which is the beginning of their life.