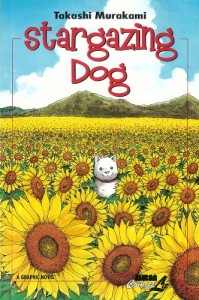 Loyal dogs are universally appealing–especially those canine friends that linger at their master’s side even after their death. Like the sweet little Greyfriars Bobby from the nineteenth century, a number of dogs have since lain mournfully at their human companion’s grave, pulling our heartstrings. Search the Internet for “loyal dog,” spend a few minutes weeping over the pure heart of man’s best friend and consider reading “Stargazing Dog,” a graphic novel that’s a best-seller in Japan, by manga artist Takashi Murakami (not the same Takashi Murakami of the Superflat, manga-inspired art movement).

In “Stargazing Dog,” “Daddy” becomes the caretaker of his daughter’s dog—he’s a distant father and husband, who loses his job in the poor economy and soon after is divorced by his dissatisfied wife. He fits his possessions in the car, and he and the dog head off for the coast on an aimless but enjoyable journey.  Despite his grouchy personality, he’s a loving companion to the dog and eventually sells everything he owns to feed and protect the animal. They live together rather easily out of the car in a field of sunflowers, eating fish and acorns.

Murakami’s illustrations are standard manga drawings with little to distinguish them from the genre—aside from the fact that sometimes the dog kind of looks like a cat and sometimes he kind of looks like a bear. The most arresting image is on the cover—the dog in a field of sunflowers under that mysterious title. “Stargazing Dog” has been a best-seller in Japan since its release, and what’s charming and universally appealing about this little novel isn’t the pictures—it’s the story.

In a slightly rambling afterword, Murakami writes of Daddy, “He may have been rather thick, but was a normal, simple kind of person. It’s just that he was a little too lazy to adapt to change at home and in society… In the past, he would have been an ordinary, good father … if those who lead a normal, simple life are unreasonably driven into a corner, such a society that brings this about is lousy.” Whether Murakami really desires a return to the “simple life” when emotionally distant fathers could only reveal their true feelings to a pet is unclear. But regardless of how Murakami feels about “Daddy,” he does believe in the ever-loyal dog Happie, who never leaves his master’s side. And faith in the uncomplicated relationship between a dog and a man is hard to deny. (Kelly Roark)