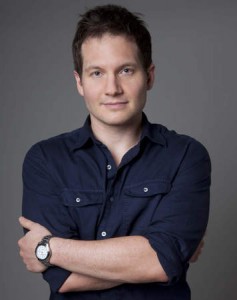 John D’Agata is the author of “About a Mountain” and “Halls of Fame,” and editor of “The Next American Essay” and “The Lost Origins of the Essay.”  He teaches creative writing at the University of Iowa in Iowa City, where he lives.

We spoke with D’Agata about his forthcoming collaborative work with fact-checker Jim Fingal, “The Lifespan of a Fact,” which chronicles the reproduction of an essay written by D’Agata alongside his and Fingal’s expansive correspondence.

To start off, I’d like to ask how you must’ve felt being approached by Jim Fingal, who at the time was The Believer’s resident intern and fact-checker.  As an essayist, rather than a journalist, what’s it like to corroborate facts?
I wasn’t particularly kind to Jim when he first contacted me. And unfortunately my attitude toward the whole enterprise only got worse as the seven-year-long fact-checking process continued. I actually knew deep down that the essay was going to have to be fact-checked, given the particularly sensitive nature of its subject matter. But after having taken a year and a half to write the essay, the last thing I wanted to do was rewrite sentences in order to accommodate a greater version of accuracy, especially since I kind of knew that for the most part we weren’t going to be able to get anywhere near the sort of accuracy that a fact-checking process claims to offer. So my initial feeling was just plain old resentment. And then annoyance.

You wrote:  “If a mirror were a sufficient means of handling human experience, I doubt that our species would have invented literature.”  While I agree with this, I’d argue that mirroring is exactly what memoirists throughout the genre are trying to do with their stories. How do you treat this differently when it’s someone else’s world you’re holding the mirror up to?
Do memoirists write stories? Are you using that term loosely, or do you really consider what memoirists produce to be “stories”? I suppose if we could recognize the memoir as a literary form that is fundamentally about sculpting stories out of the raw experience of a life, then this mirroring question wouldn’t be an issue. Unfortunately we don’t recognize the memoir that way, and you’re absolutely right that a good number of memoirists don’t see the form as a sculpted version of reality, which I would suggest is why a good number of memoirs aren’t particularly rich literary experiences for us as readers. They lean too heavily on their subject matter.

It seems to me like you give “memoir” a different treatment when it’s someone else’s world, someone else’s memories.  You once wrote that “memoir is an assaying of ideas, images, and feelings,” and furthermore called it “an impulsive exploration.”  So etymologically speaking, memoir fits within essay, but I do wonder whether that impulse is justified in reportage?
Well this isn’t reportage. I mean, I apologize for dismissing your question, but, really, this isn’t reportage. I think the single biggest problem we have in this genre is the insistence of some critics and some writers in treating the essay as something that’s synonymous with journalism. We are not journalists, and the activity of an essay is not in any way related to the activity of reportage. Essayists might occasionally use some of the same research techniques as journalists, but research is different from writing, of course. What I do with material will be fundamentally—and necessarily—different from what a journalist will do with the same stuff. So whether it’s our life or someone else’s life that we’re writing about, our allegiance as essayists should be to the same thing as any other writer—that is, to art. Not to the feelings of our subjects, or the expectations of our readers, or the restrictions of any particular literary movement. It’s to the art: first, foremost and exclusively.

I know the conversations between you and Fingal took place over a long period of time, but how much of what you’ve said to him do you still agree with?  For instance, do you still instruct yourself and other writers of nonfiction to make things more precise and authorial?
Hmm… Well, I’m not sure I’d say that always making things “precise and authorial” is what I encourage my students to do, if that’s what you mean, and I’m not sure I’d agree that precision and authority are what I was ultimately even hoping to achieve in this essay. By its end, the essay is actually questioning authority. In fact I’d say that the illusion that there’s any one formula we can follow or a set of rules we must obey in this genre is the point of the book. And that is something I definitely still believe. However, the experience of writing this book certainly softened our respective attitudes toward accuracy. In other words, Jim often says these days that he feels far less tyrannical about needing to have all of the facts right in an essay, while I’m sometimes willing to admit that there are some facts that are probably important to nail down.

You decided you didn’t want to use a recorder during your interviews. And you said that now you’re “willing to admit that there are some facts that are probably important to nail down,” so how does any of that now change your non-journalistic approach to research?
I still don’t use recorders or notebooks during interviews. And this is because I have found that a subject will begin to “perform” during an interview if they realize they are being recorded. Even if they acknowledge that they’re being interviewed (and of course I always ask permission to interview someone), a subject is more at ease when they and I are just chatting, rather than when there’s a big tape recorder sitting between us or if I’m furiously writing down everything they say. It’s an understandably subconscious reaction to edit oneself and to withhold, because it’s intimidating to think that whatever we’re saying is going to be permanently recorded. However, if I’m interviewing a “professional” (such as a coroner or a cop, as in the cases of “Lifespan” or “About a Mountain”) I’ll usually just use a recorder. These folks are so rehearsed when giving interviews—in many cases they’ve even been professionally trained to give interviews—that it’s pointless to expect anything other than a standard pre-approved statement from them.

“About a Mountain” was a project on which you could’ve approached the subject from either an essayistic or a journalistic standpoint.  Why the former?
Because I’m not a journalist. In fact, the book makes a point of attempting to proceed journalistically at first, and then it makes a point of dramatically abandoning that approach because its narrator doesn’t feel satisfied by what that approach is able to uncover, convey or achieve.

What specifically made you decide to abandon the journalistic approach while you were writing the book?
The intended effect was to suggest that a journalistic approach couldn’t adequately capture the nuanced undercurrents in Yucca Mountain and Levi Presley’s stories, particularly because the story I found myself most moved by was the one toward which Yucca and Levi were pointing metaphorically. In my mind, “About a Mountain” isn’t about Yucca or Levi. It’s not about nuclear waste, politics, Las Vegas, or suicide. It’s about a loss of faith in the effectiveness of information and in the power of human knowledge.

What is it you’re aiming to give the reader with a project like that?  You said it was about “a loss of faith in the effectiveness of information and the power of human knowledge.”  So, ideally, is that what you want the reader to take away from your work?
Well obviously I always hope there are other things the reader would take away from the text, elements they might enjoy along the way and find confusing or infuriating, et cetera.  Ultimately I want there to be something in the text that challenges a reader, because I’ve always felt that that’s the objective of literature—to lead us into unfamiliar terrain so that we might be genuinely changed.  Emotionally changed, intellectually changed, or however.

But thematically, that loss of faith is what I take away from it.  I never expect readers to interpret books or essays the same way I do.

Who came up with the title “The Lifespan of a Fact,” and how?
I’ve been sticking “Lifespan” to almost every project I’ve done since my first book. I’ve liked it as a title for a long time because it summarizes my own thoughts about the limitations of the awful term “nonfiction,” and thus it points toward everything I love about the term essay. I first heard the term “life span of fact” back when I was a kid in a school assembly about science that we were dragged to. I remember nothing about the assembly other than that term.

What can we look forward to seeing from you in the future?
I’m finishing up a third and final anthology on the history of the essay. And after that I’ll begin two new projects.  One is a graphic nonfiction collaboration with a visual artist on the Greek writer Plutarch. And the other will be a collection of essays.

John D’Agata and Jim Fingal will be speaking February 23 at 5:30pm at Columbia College in Hokin Hall, 623 South Wabash, Room 109.