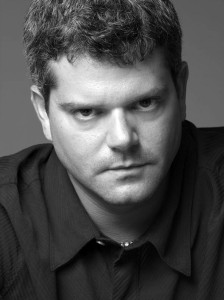 It’s a blistery cold Sunday morning when I meet author Shalom Auslander at the McDonald’s (the only place open near his hotel) on Clark and Monroe a few hours before he’s scheduled to give out an award for memoir writing at Spertus. On the last leg of his U.S. tour for his novel, “Hope: A Tragedy,” Auslander confesses he’s relieved to go back to his “bubble”: the idyllic life he’s created with wife Orli and two sons, ages two and seven, in Woodstock, New York. “I can’t wait to just get back and lock the doors, load the guns, close the gate and set the dogs free,” he says, smiling.

The first subject we tackle is hope. “Hope can be a tragedy when you hope too much,” explains Auslander, covered in a black wool coat etched with gray stripes, his friendly brown eyes and warm smile framed by a mass of silver curls. “We have very unrealistic expectations of life,” he explains. “If you get out of here and you haven’t been tortured to death or gassed or thrown in an oven, you win,” the author says with a laugh.

Leave it to Auslander to talk about the Holocaust in a humorous, yet refreshingly non-precious way. In “Hope,” protagonist Solomon Kugel moves to the mythical town of Stockton, New York with his wife and son to escape history. Yet despite his best efforts, history comes to nip at Kugel’s heels. He makes the mistake of bringing along his mother, a woman who daily lives out the horrors of surviving a Holocaust she never endured, and encounters Anne Frank in his attic, grotesque and writing her second novel. Kugel’s tragic hope is both his downfall and a paradigm for the horrors of war and genocide.

Would the world be a better place with pessimists in charge? Yes, insists Auslander. “I think Bush thought he was going to help, which is much worse [than going to war for oil],” he notes. “And Hitler thought he was helping, he thought he had the solution to the world’s problems. And now we’re all fucked,” the writer observes wryly.

Despite appearing prominently in the novel, the character of Anne Frank was not on Auslander’s mind when he started writing. “I just set out to write a funny story about a guy with good intentions and everything goes awry,” he explains. Yet soon Auslander realized he was going out of his way not to write about Frank. Growing up in the religiously observant Jewish community in Monsey, New York (depicted in his memoir, “Foreskin’s Lament”), Auslander was “overdosed” on images of Anne Frank and the Holocaust. From the third grade on, Auslander watched endless film reels of camps and mass graves every year on Holocaust Memorial Day. At first shocked and horrified, then angry, Auslander was later disgusted with the misery obsession. “By the time I was seventeen, I hated Anne Frank,” he admits. 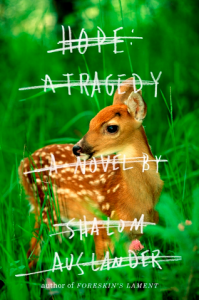 And by describing Frank as a decaying, yet willful woman hiding in the attic in his novel, determined to write her book and avoid being in the world, Auslander realized he was breaking a holy icon. “In a certain way, I know how she is represented in this book would have pissed her off, royally,” he says. In doing research for the character of Frank, Auslander discovered that the diarist was a tough, ambitious, smart little girl who sent her book out for publication (the manuscript was not found in a desk) while in the attic and had a portion of her diary broadcasted on the radio during her lifetime (she did not hear the broadcast).

By writing about her, Auslander came to have newfound respect for the little girl he once despised “She was not going to be a soft woman following the Orthodox way or any kind of religious rules,” he explains. And by the end of the novel, Auslander admires Frank. “I went from being like, ‘fuck off little girl, I have my own problems,’ to ‘wow that’s a cool lady,’” he says.

Having devoured the hilarious memoir “Foreskin,” which recounts Auslander’s rebellion from the Orthodox fold (wildly consuming cheeseburgers on the sly and going to the mall on the Sabbath), I detected the obvious similarity between Auslander and Frank in “Hope.” “I’ve always been more religious than observant,” explains Auslander. “Observance is like doing aerobics, it’s rote movement and action—it’s mindless,” he adds.

Being religious, explains Auslander, means being of a religious mind—there are questions bothering you. “I can’t imagine a single rabbi I grew up around that wrestles with God and death and life more than me,” he asserts. And how does he cope with these consuming worries about death and life and meaning? Laughter, says Auslander.