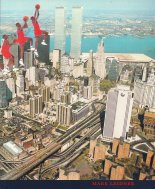 Much of “Beauty Was The Case That They Gave Me, ” Mark Leidner’s first full-length collection of poems from Factory Hollow Press, presents situations that are both surreal and familiar, as if they have been ripped right out of a movie. Many of the poems wield altering perspectives, suggesting the reader engage them as if “watching your favorite TV show through a straw.” The cleverness of these poems is a speaker forthright with his obsessions, like in these lines from “Blackouts”:

“It’s like only being able to become angry when things go right.”

“It’s like interrupting polishing silverware to beknight yourself with a little knife.”

It’s beautiful to watch lines of poetry surprise and delight that narrow and expand the reader’s perspective, while being self-aware and self-assured:

“You open your front door for the first time and realize you’ve been living inside
a refrigerator.”

“It’s like breathing skeptically in the humid air of a new planet.”

The reader is thrust into the ever-changing world where the speaker has so many different ways to admit that his emotions are varied and difficult to pigeonhole.

Regardless, Leidner makes grand, cinematic gestures that are relentlessly amusing, because he juxtaposes the merging of simile and metaphor with everyday, domestic acts: “It should be like the sun kissing a planet on the cheek.”

The images in Leidner’s poems are crisp and avoid convolution despite leaps in setting, as in the opening lines of “Charismatic Ambulance Driver”:

It’s WWII.
I’m a charismatic ambulance driver.
You make me French toast
and when you set the plate down
you kiss my neck
and I just stare and stare at you.
We’re tilling a field in Poland
when the clouds break open
and we throw down the reins of our plows
and make love in the wind and the mud
while the mules, mute, look on.
You are about to take a spacewalk
and I stop you in the airlock
by shouting your name
and as you spin around to face me
your hair splays out in the absence of gravity.
Not without this, I say
handing you your helmet.

What makes these scene shifts work is the endearing tone, showing a relationship that transcends the era in which they exist. But that’s not always the case. In the poem “Love in the Time of Whatever Disease This Is” Leidner writes “Love castrates ambition / and I’m so stupid I’d rather be great than happy.” The line enacts an ironic fulfillment, suggesting that love and ambition have a tough time co-existing. Leidner’s comedic tone is effective in both long and short poems because of his puncturing acknowledgment of the real world and punctual timing. Whether a poem is reimagining Albert Einstein’s biography, or if World War II was fought “entirely by karate chop” or if the poem simulates a movie-pitch meeting, as in the long poem “Romantic Comedies,” the reader will most likely experience comedic irony, heartbreak and suave honesty.

Leidner is also the author of the chapbook “The Night of 1,000 Murders” (Factory Hollow Press) and the book of aphorisms “The Angel in the Dream of Our Hangover” (Sator Press). Both of these have a similar comedic tone, and the latter is a pitch-perfect collection of fortune cookie one-liners.

Reading “Beauty Was The Case That They Gave Me” is like being trapped in a cavern in which repetition and allegories are the stalactites and stalagmites lining a mineral-rich cave ceiling. Many of the poems are amusing acts of defiance toward traditional narrative poetry, like glitter-bombing a presidential candidate just to see his face turn fire-engine red, suitable given the book’s slam dunk of a cover. These poems expand one’s perception of what a poem can be while reinforcing a lyric quality that is accessible and pleasantly addictive. (Stephen Danos)

“Beauty Was The Case That They Gave Me”
By Mark Leidner
Factory Hollow Press, 94 pages, $15