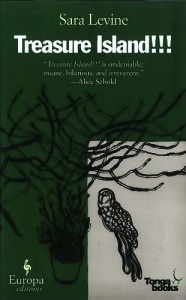 A recent college grad decides to change her life and live by the four “core values” in “Treasure Island”: Boldness, Resolution, Independence and Horn-blowing. Sara Levine, a Chicagoan, has written a brilliantly funny novel about a lost young woman who is obsessed with Robert Louis Stevenson’s book. This clever novel, whose title includes no less than three exclamation points, does more than examine the post-collegiate angst of the middle class (a subject into which Levine, an instructor at the School of the Art Institute, surely has some insight): It’s an ironic examination of the classic American family structure. The main character moves in with her parents after burning through her job at the Pet Library and a short stint at her boyfriend’s house. (The story of the Pet Library slowly unfolding is merely one of the great pleasures awaiting the reader.) An ill-gotten parrot is also brought to the family home. Our heroine, despite unemployment and a failed relationship, is quick to point out that her sister—a school teacher in something like a healthy relationship—is the real failure. The antagonism between sisters is the type that’s only shared between old-fashioned villains and beloved siblings. Self-improvement, in this case, requires that essential twist—the easiest way to feel better about yourself is to put down someone else. Another easy target is the childhood frenemy Patty, who works at a sandwich shop in the mall. Sometimes the bizarre machinations become fantastical, but Patty, the straight-man to Sara’s “Treasure Island” fairytale machinations, grounds the story in reality.

Almost a cautionary tale against liberal education, Levine skewers the American Dream. This recent college grad has few or no prospects of finding a job in her field. She studied English less out of passion than as a strategic move to avoid Scantron tests. “English majors never failed; at worst, their opinions simply differed from their teachers’, and everyone agreed that this difference could be adequately expressed with a C and a down-tilting minus. But I ask you reader, where had all that paper writing got me? Fill in the circle completely: O Nowhere!” Throughout “Treasure Island!!!” there’s a sly refrain—isn’t that a book for boys? For an English major, Levine’s character has little critical thought for the gendered implications of classic literature, but that’s just part of the fun. “Maybe a boys’ book was exactly what I needed,” she says, after dismissing the non-life-changing “Anne of Green Gables.” She’s of that generation that’s been raised to believe that everything they do is amazing—her boldness is not so bold, and her resolution? Irresolute. Independence? She lives in her childhood bedroom. Her mild “adventures” are narrated in the language and tone of the buccaneer adventure novel. The appropriation of Stevenson’s triumphant style is hilarious in this contemporary story. Never has the effects of the recession been told with such derring-do. So much bravado in those inter-familial conversations! Such swashbuckling bird-ownership! All those exclamation points!  (Kelly Roark)