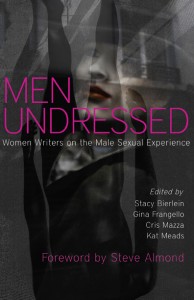 Finally! We lady folk get to see men without any clothes on, metaphorically. Naked and exposed, with all their weaknesses, desires, fears and insecurities finally out in the open. Reading “Men Undressed: Women Writers on the Male Sexual Experience,” a compilation of short stories by women about men and their sexuality, you realize that men are just as complex and screwed up as us, but even more so because they try so hard to hide it. With a foreword by Steve Almond and edited by Stacy Bierlein, Gina Frangello, Cris Mazza and Kat Meads, this juicy volume is an eye-opener. As Mazza notes in her introductory essay, “Literature should allow us to imagine people who are unlike ourselves—to slip into their lives, their minds, their perspectives, not for the sake of parodying alleged deficiencies, but to discover both our innate similarities and our enigmatic differences, and thereby appreciate them more.”

Reading “Men Undressed,” I couldn’t get enough. Each male character was familiar and yet foreign. There’s Bernie, a guy who is mesmerized by Sasha’s breasts but in the end is desperately in love with her in Jennifer Egan’s “The Gold Cure.” There’s white-trash Dale, who’s desperate for diversion from his suffocating family life in “The Family Bed” by Cris Mazza. There’s Eric, who happily notes that a potential lover is too busy to be clingy in Elizabeth Benedict’s “The Practice of Deceit.” Loathsome in their objectification of women, these characters are relatable in their haunting, ceaseless search for love.

Not so surprisingly, women writers expressed male sexuality in literary form quite late. Mazza reminds us that “Lady Chatterley’s Lover” by D.H. Lawrence (a man) was first published in Italy in 1929 and was banned in the U.S. until the 1957 Supreme Court case Roth v. United States. Mazza claims it was not Edith Wharton or Anaïs Nin or even Kate Chopin that laid the foundation of female-authored sexuality, but Erica Jong’s 1973 book, “Fear of Flying,” and the authors that followed suit, such as Kathy Acker and Mary Gaitskill.

“Men Undressed” elevates sexuality in literature to the place it truly belongs: as a wide-angled view into the bizarre human soul. In Aimee Bender’s “Motherfucker,” the guy who seeks out single mothers simply for the joy of fucking them and leaving them behind is a strange emotional cripple you end up pitying. “When he closed his eyes, the torrent of longing waiting inside was so thick he thought he might drown in it,” Bender writes.

Seeing men “undressed” in this book made it far easier to understand them. What I relearned: Men shouldn’t think of us as objects so much, and we shouldn’t judge them so much for lusting after us. (Marla Seidell)