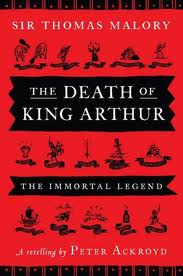 In post-Classical literature, there is perhaps no better demonstration than the legend of King Arthur of the idea that it is not the destination but the journey that is most important. For, in almost any version of the tale, the end is the same: “Here lies Arthur, the once and future King.”

The appeal of Arthur has endured for three-fourths of the Christian era, and we can speculate on some reasons why. First there is the mystery of this figure’s historical origin, assuming he actually existed. There have been several candidates proposed, mostly British or Welsh, of a remarkable king who united vast portions of Britain after the Romans. He may have dated back as early as the fifth century. A ninth-century writer spoke glowingly of one contemporary ruler but added the reservation that he “was no Arthur,” so we may assume he was well-known then.

The core story is of a king with great vision and altruistic values. Over the centuries, various writings have grafted embellishments. In some versions, Arthur’s holdings have extended across Britain to continental Europe. Norman and French writers, and preeminently Geoffrey of Monmouth (in the twelvelth century), amplified stories of Arthur’s knights—and their “Round Table”—with the chivalric virtues so much popularized in the Middle Ages.

Many of these latter were gathered together by the English knight Sir Thomas Malory, published by the pioneering Caxton press in 1485. In Malory you will find it all, in addition to the foundational Arthur saga: the stories of Merlin’s magic and the young Arthur, the rise and fall of Camelot, the presumed betrayal of Arthur by his Queen Guinevere and knight Sir Lancelot. 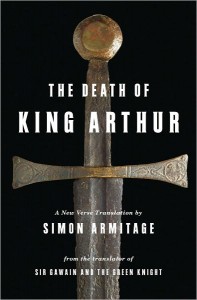 By comparison, the 1400-or-so pre-Malory story retranslated by Simon Armitage is more basic: Arthur’s efforts to assure and consolidate British rules carry him and his knights across the English channel to challenge the Roman empire. His victories take him to the very gates of Rome, where he receives word of how his ward Mordred is undermining him at home and he must return. Here also is the betrayal by Mordred, but that of Lancelot and Guinevere is absent.

Written in Middle English, this version is believed to be a Yorkshireman’s work, of which only one copy exists. In form it is poetry that relies not on rhyme but on alliterative words and beat for its powerful emotional effect; it is therefore known as “The Alliterative Morte Arthure.” Besides the poetry, you may find yourself drawn to the idea that somehow here we may be as close to the original Arthur tale as we’re ever likely to get.

There are gruesome clashes of knights and archers and deeply affecting noble deaths, but also pastoral interludes enhanced by the unusual musicality of this very old form of poetry. Pages of the Middle English text face pages of the modern English translation, so one can compare; the original is quite powerful, and one quickly gets the hang of bouncing back from one page to the other. It is not work: it is simply something you find yourself doing.

As an example, consider in modern English this passage on Sir Gawain and his men heading toward attack, followed by just the first portion of it in the Middle English:

“They went forward to the forest, those fearless men at arms, / eagerly they entered those painted uplands / through valleys and vales toward vaulting hills, / through holts and hoard woods gray with hazel, / by marsh and mossy morass to the mountains, / to where morning mist slept on the meadow, / where scythed hay lay strewn and unstacked, / swept down in swathes among sweet flowers. / They stepped out of their stirrups and grazed their steeds / as the sun ascended, and songbirds sang / to the miracle of morning, like messengers of our Deity / bringing solace to all sinners who see it on earth.”

Now, the Middle English: “Now ferkes to the firth these fresh men of armes, / To the felle so fawe these freshlich bernes, / Through hopes and hemland, hilles and other, / Holtes and hore woodes  with heslin shawes, / Through morass and moss  with mountes so high,…”

University of Sheffield Professor Armitage’s previous works include his critically acclaimed translation of “Sir Gawain and the Green Knight.” Ackroyd is a Londoner who, besides his translations, authored among other nonfiction “Dickens: Public Life and Private Passion.”

So, which will it be, the Armitage or the Ackroyd? Armitage’s alliterative Arthur for the magic and music, Ackroyd’s Malory for the breadth and depth of the tale! (Martin Northway)

“The Death of King Arthur: The Immortal Legend”
A retelling by Peter Ackroyd
Viking, 336 Pages, $27