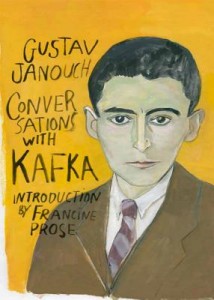 Every budding teenage writer should have a mentor and friend like Gustav Janouch had. It was his good fortune that the Workmen’s Accident Insurance Institution where his father worked in Prague after the First World War also employed a lawyer named Franz Kafka, and that there was something that clicked between the young writer and the already-famed author of “The Metamorphosis.”

Kafka patiently tolerated the young man’s interruptions of his office routine, once waving him in with “Greetings from my paper dungeon!” Kafka even invited Janouch to accompany him on walks at all hours about the historic city, whose byways he knew so well.

The two discussed every subject under the sun—the puzzle of human nature being the great subject—and Janouch had the good sense to record these experiences after each session, gathering them together into a book that yields remarkable insights into this influential literary figure. “Conversations with Kafka” is an often unguarded, hair-down view of the author that, while suffused with Kafka’s voice, is yet somehow “un-Kafkaesque.”

As they stalk the city, the tall, spare Kafka offers opinions to his young charge on writing and life that sometimes appear intended to stir a response and other times are so compact they seem as polished as aphorisms: “What one writes is only the ashes of one’s experience.” Other times, there is a free-wheeling give-and-take. In her introduction to this new second edition, Francine Prose questions how Janouch managed to “memorize verbatim … long flights of improvisational fancy that we ourselves have to read many times before we can get them straight,” but concludes, “If Kafka didn’t say all these things, he said some of them and should have said all the rest.”

It is just possible Prose underestimates the capability of a highly motivated Boswell to produce an accurate transcription of conversations. After all, efficient “old-school” journalists could retain long dialogues in memory, and certainly reproduce them with considerable accuracy if they put pen to paper promptly, which Janouch appears to have done.

The picture that emerges of Kafka is that of a man with an uncommonly strong moral compass. Certainly Janouch’s father, a Christian, had an opinion apparently untainted by any prejudice toward Kafka’s Judaism; in his view, the man embodies the Golden Rule yet is his own man: “Kafka personifies patience and kindness. I cannot remember an occasion when there was trouble in the institution on his account. Yet his approachability is not a sign of weakness or a desire to please. On the contrary; he is easy to get on with because, by being completely fair, just and at the same time understanding towards others, he commands a similar response from everyone around him.

“People speak freely to him, and if they find it hard to agree with him, they prefer to say nothing rather than disagree. This happens in fact quite often, because Kafka expresses unpopular views which are completely his own and contradict accepted opinion.”

There were in fact reports that occasionally Kafka had moved clandestinely to tip the scales of justice in favor of a settlement for a workingman that was not necessarily in the Institution’s own narrow self-interest. Such behavior was not, of course, especially lawyerly, and would not have found favor with so-called “company men.” Janouch observed that Kafka’s own immediate officemate was hardly his biggest fan.

Many of these narratives consist of thoughtful advice and encouragement by an older man to a younger man, but there are also digressions into unexpected adventures that spin out into standalone stories. An example is the men’s detour into the Jakobskirche, where the smoke-blackened relic of a human arm has hung from a chain in the church for six centuries. Janouch recites the grisly tale behind the relic, which becomes an occasion for a thoughtful exchange between the men on a “miracle” that attended the event. Kafka speculated that such a miracle was impossible in the twentieth century because “Today the longing for God and the fear of sin are gravely enfeebled.”

Kafka’s friendship was a great gift to Janouch, and Janouch was not so young that he did not see it. Through Kafka’s influence, Janouch said his “life became deeper and more complicated but without becoming more cold and detached. On the contrary; the almost infinite complexity of things and people (he observed), which never failed to astonish me, made my existence richer and more meaningful.” For a time this manuscript was presumed lost, but it was rescued and published. Thus this record of friendship continues to resonate as a nearly miraculous gift to us today; it is itself a most magical realism. (Martin Northway)