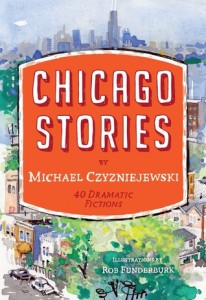 You’ve got to love the concept: reimagine Chicago historical figures, prominent contemporary personalities and even inanimate icons speaking their mind on subjects germane—or not.

The result: Michael Czyzniejewski’s “Chicago Stories, ” forty fictional monologues riffing on the common culture of the Windy City’s shared history, projected forward into a possible future. Not quite historical fiction—more like historical jazz.

With each monologue accompanied by free-form sketches by Rob Funderburk, it is easy to picture the pieces staged as a series of one-person, one-act plays. Individually, the stories are often audacious, even poetically musical; taken together they are simply great fun, stirring up the reader’s imagination.

They also serve the useful function by helping keep Chicago history a communal, living, breathing thing worthy of comment and conversation. Obviously Chicago-native Czyzniejewski (you’ve got to love the take-no-prisoners, give-no-vowels Slavic surname) has been paying attention since his youth growing up in the south suburbs.

These days, he and his wife and son live in Bowling Green, Ohio, where he teaches at Bowling Green State University and is editor of the Mid-American Review. He is also author of the story collection “Elephants in Our Bedroom.”

A sampling of titles will give you an idea what’s going on here: “Rod Blagojevich Negotiates His First Prison Tattoo, Joliet State Penitentiary,” “On His Deathbed, Ray Kroc Reveals the Secret Behind the Special Sauce,” (reaching WAY back) “Jean Baptiste Point du Sable Settles at the Mouth of the Cuyahoga River” and the seemingly shaggy-dog-inspired “The Sixteen-Inch Softball Buys a Shot of Malort for the Italian Beef Sandwich at the End of the Bar.”

Cockeyed Chicago optimism and the city’s the-glass-is-half-empty-so-what pessimism are well-blended. Without explicitly saying so, the author’s imagined commencement anecdote delivered two decades hence to a college graduating class by former President Barack Obama seems to look through the glass of his presidential achievements in two ways. What does it say that you feel obliged to boast of your post-presidential perfect 300 score in bowling, “the first black ex-president to accomplish this particular feat”? What do you think? Was Obama’s healthcare plan still standing? Discuss amongst yourselves.

Among the inanimate icons who have a beef (among them the Chicago Water Tower) is the “new” Soldier Field, “Tired of the Spaceship Comparisons…” After reciting the facts ruling its existence is a final word on its own behalf that is pure Chicago: “When it comes right down to it, you’d have to admit, you wouldn’t ask about any of this if the boys were making a go of it, the scoreboard singing a happier song. If Butkus or the Coach were still here. Or, God rest his soul, Walter. If Brett Favre were running for his life, the microphones picking up the crack of his bones. His head bouncing off my hard earth, his mind on a brief mission to Mars.”

Ouch. The collection isn’t perfect. Some pieces have a decidedly first-draft quality and should have been tossed and replaced. Also, one maybe wishes a dash of Capone here or a dab of Ness there, or perhaps a bit about the Picasso sculpture deconstructing its own viewers deconstructing it.

Anticipating perhaps that the best defense is a strong offense, the author lets Sandburg have at him in a final, savagely pitch-perfect critique. Still got a problem? Either wait for volume two, or head to Wrigley Field, where his bio says the author returns each summer to sell beer in the aisles. Take it up with him then, but maybe also take care where you’re seated when you do. (Martin Northway)