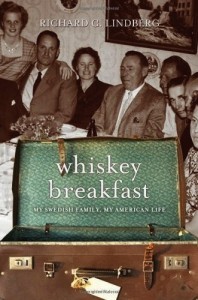 Readers of Chicago history should already know the name Richard Lindberg. He has authored fifteen books, among them the 2010 Society of Midland Authors Award-winning biography “The Gambler King of Clark Street: Michael C. McDonald and the Rise of Chicago’s Democratic Machine.”

Yet his newest, the product of a self-confessed “life’s mission,” may be his masterpiece. In reconstructing his own somewhat mysterious Swedish-immigrant origins, “Whiskey Breakfast: My Swedish Family, My American Life” is simultaneously a highly personal and unflinching deconstruction of and challenge to both Chicago immigrant and suburban myths.

Think of it as the true-life antidote to the popular nostalgic Lake-region movie “A Christmas Story.” At the center of Lindberg’s tale is unraveling the truth behind his father Oscar’s 1924 emigration to the United States, about which he spun a version that disguised that he had come here illegally, a draft dodger under an assumed identity; part of his personal myth was a battery of Old Left ideas that he retained but basically did not act upon even as he became his own “boss,” a Chicago construction contractor. There was an even darker secret, too, that Lindberg has ferreted out.

For virtually all of the author’s childhood, his sire was an absent father. Lindberg’s mother was the third of four wives and seemingly innumerable girlfriends of an alcoholic man who managed to keep at both physical and psychological arm’s length the son who most desperately needed him; hence Richard’s older brother bore the brunt of direct conflict with the father.

Reared by his mother and raised in Norwood Park in the bungalow of his maternal grandparents, young Richard was no “Ralphie” and his father decidedly no Darren “Pop” McGavin. (Lindberg’s account of his 1961 holiday visit with his father and girlfriend has to be one of the bleakest Christmas stories ever set down.)

One terrible outcome of an absent father was Richard’s incessant youthful bullying by classmates, an experience that scarred him. It also has certainly colored his experience of the suburban myth of the 1950s and sixties. It has given him the authority to write, “With the troubles of the modern world assailing us, we desperately want to believe the 1950s was the last good decade—a moment in our mass culture when Ward Cleaver and a score of TV dads crafted the proper celluloid image of what the sacred duty of modern fatherhood should be.

“Unfortunately, that image masked the reality of a generation of suburban postwar dads confronting rising alcoholism, marital infidelity, the teenage delinquency of their progeny, and their own creeping disillusionment with the status quo—unspoken and dangerous social undercurrents filtering into the rhythms and routines of American life.”

In young adulthood Richard came to a sufficient truce with his father such that, while still not close, they could spend regular time together; the father remained an enigma, but Richard was finally able to fill in some important blanks. Further closure was made possible by Richard’s discovery after his father’s death of a suitcase stuffed with correspondence between the father and Swedish relatives, as well as Lindberg senior’s own handwritten reminiscences.

The son painstakingly worked with his family to get the Swedish letters translated into English. This treasure trove and his lifelong interest in and access to the principles behind his own life’s drama accounts for detailed accounts of events and dialogues to which he was not himself witness.

Heroes do emerge, none of them his father. As background, Lindberg weaves the larger story of the now-almost-forgotten immigrants of Chicago’s “Swede Town,” whose spine was the North Side’s Clark Street and which wound up into today’s Andersonville. This is a welcome and worthy saga. (Recently arrived in Chicago, Richard’s maternal grandfather witnessed the horrific 1915 sinking of the Eastland in the Chicago River.)

Then, too, there is the extended family Oscar Lindberg left behind in Sweden, among them stalwart missionaries of the Salvation Army. Somehow, Oscar seemed to sustain a positive image with these relatives, through his own correspondence and gifts from America, but there was no hiding the truth from his sons.

Richard’s brother Chuck had such an unblindered view of their dad that when the two brothers visited Sweden together, his reaction was one of astonishment: “Richard, how is it possible that our old man could be related to these fine people?”

Lindberg alludes to the Swedish proverb that joy and sorrow are next-door neighbors but also demonstrates that it may be a similarly short trip from resignation to acceptance. “Whiskey Breakfast” is a masterpiece of family memoir, a dense tale well told, often poetic and ultimately redemptive. The author’s “lifelong mission” has finally earned him peace with his past. He survives, and thrives, with his wife in the same Norwood Park home in which he grew up. (Martin Northway)