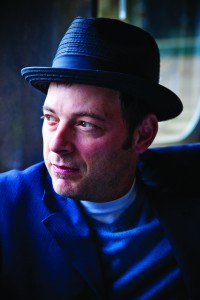 Anyone who attended the Beautiful, Words event at Beauty Bar on March 2nd during the AWP Conference could attest to the crowd’s rowdiness. To be fair, by that time, much of the audience had enjoyed their fair share of booze-laden late-night readings and had listened in on hours of panel discussions with authors, editors, publishers and other industry experts. Perhaps attendees were too hung over or tired to care. Even from where I stood at the front of the crowd, just fifteen feet from the readers, it was difficult to hear.

Evison is currently touring to promote the January paperback release of “West of Here,” his widely celebrated novel that entwines the past and present of a fictional town called Port Bonita, located on the coast of Washington. Evison is the executive editor at “The Nervous Breakdown“ and blogs at “Three Guys, One Book.” I had the chance to share a conversation via email with Evison about “West of Here” and the challenges of structuring a story of such a large scope.

We first encounter Port Bonita a few years after its conception, in the early 1890s: when “west” was still synonymous with opportunity, riches and new beginnings, Americans were in a race to discover the remaining acres of unclaimed land and tribes of Native Americans were adjusting to the social influence of white settlers. “Port Bonita is based on the real town of Port Angeles on the Olympic Peninsula,” Evison says. “The history of the town, from its settling to its current state of financial and ecological demise, presented me with a great microcosm for the American experience. Here is a place and a culture haunted by its beginnings, forced to reckon with its early mistakes.”

Making peace with the past is something the town and its people seem to share. There’s Eva, a fierce and intelligent young woman who fled her life in Chicago to help build a socialist colony outside the town, and did all this while pregnant. Ethan is Eva’s former lover, a man of dreams and inventions, to whom failure is an old friend and success a stranger. James Mather is the man hired by Port Bonita to explore the land beyond the famed Olympic Mountains, beyond which even the local Klallam Indian tribe has never dared to travel. And then there’s Thomas, the illegitimate son of a Klallam woman and a supposedly righteous white man, a boy who sees the world differently.

Port Bonita circa 2006 is a very different place: the manmade dam halting the flow of its major water source seems to serve as a perfect metaphor for what the town has become. But while Port Bonita is hardly what it once promised to be, the characters share the same restless desire to be a part of something as great as their 1890s counterparts. Krig is a seafood-packing-plant manager by day, Bigfoot enthusiast by night. Curtis is a kid seeking escape from his mother and her convict boyfriend and the “thing” with his father. And Timmon is a young man who, after losing everything, seeks a solitary life in the same wilderness Mather’s team trekked through 120 years previously.

Of course, the challenges of writing a story in two separate parts of history are numerous and varied, but Evison handles them with finesse. “From the beginning, I conceived of the narrative as a sort of call-and-response between the two time periods, a conversation. For the most part, the narrative unfolded organically—that is, I didn’t write the narrative lines separately, nor the time periods separately.”

With over sixty characters and its frequent leaps back and forth in time, “West of Here” is a hugely ambitious work. “I wanted to write a real world-beater of a novel—vast in scope and theme,” says Evison. “I didn’t want to write a historical novel, but a novel about history—what it really is, how it really works, how each individual embodies the whole of human history, how we are all beholden to everything that came before us.”

Evison’s next book, “The Revised Fundamentals of Caregiving,” is due out in August. And after that? “I’m putting the finishing touches on another novel, ‘The Dreamlife of Huntington Sales,’ which marks a return to the Olympic Peninsula. It’s something of a genre-bending exercise with big existential themes—the nature of truth, for starters.”