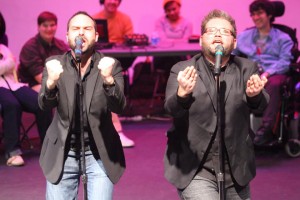 “Poetry is an important thing,” says local slam poet, story-teller and writer J.W. Basilo. “People are often not aware that poetry—and performance poetry specifically—is an absolutely viable and entertaining art form.” Basilo is the artistic director for Chicago Slam Works’ 2012 season, which kicks off on April 3rd with its show, “Two Sides.” Basilo has represented Chicago at four National Poetry Slam Championships and was a finalist in both the 2007 Individual World Poetry Slam and the 2009 National Underground Poetry Individual Championship. He has also published his own chapbook and released four full-length spoken word albums.

Basilo has worked with Chicago Slam Works, which has held three National Poetry Slam Championships and celebrated its twenty-fifth anniversary last year, since its inception. And according to Basilo, this is a season like none before it. “What we’re doing with this season specifically is combining performance poetry with other art forms, whether that be dance or story-telling or drama. We’re working poetry in as a way to show people poetry is an absolutely engaging thing to see. This is really heightening the game.” 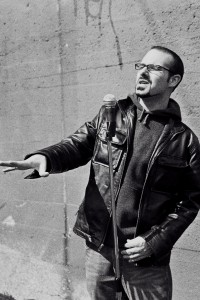 That’s the message Chicago Slam Works is always trying to communicate to its audience, but Basilo acknowledges that not everyone lives and breathes poetry as he does, and sometimes, it’s difficult to get people to budge from their preconceptions. “People generally have a weird stigma about poetry. At a poetry slam, a poet has just three minutes, and they read their one poem, and the audience judges them…and it’s just a showcase for one poet at a time. We’re trying to bust that. This season, we’re putting poetry on a bigger stage. These are all pre-planned, polished performances. These are the best poets in the city performing together as an ensemble. It’s not about the competition so much as it’s about the showcase and the art of the poetry. This is the all-star game of slam. This is much bigger.”

All-star game, indeed. The roster for “Two Sides” includes poets Dan “Sully” Sullivan, Jamila Woods and Reggie Eldridge, and story-tellers Bill Hillmann, Samantha Irby and Cara Brigandi, among others. The show pairs six local poets with six local story-tellers to tell opposite sides to the same story. The poems and stories are usually autobiographical. “They’re presenting duets using two different tools—prose and verse,” Basilo says. “This is something that, to my knowledge, has never been done before.”

Following “Two Sides,” Chicago Slam Works will present two other events, each experimental in design. “Dead or Alive” will be held on May 25. Basilo calls it the “Battle Royale of slam,” in which local slam poets will compete in a mock face-off against actors playing dead poets. For fickle or discriminating poetry fans, this is the show to see. “A lot of times, people get this idea that the poetry today isn’t as good as it once was a hundred years ago. And then there are people who like today’s poetry, but think the stuff they read in high school was boring. ‘Dead or Alive’ is an experiment to see if performance is really the great equalizer between those two, and to celebrate both  modern poetry and the poetry of old,” he says. 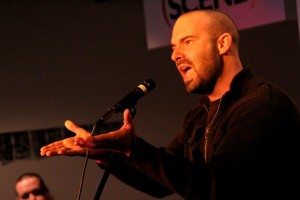 On July 21, CSW will close their season with “In Any Tongue,” a collaboration with the local Speak Easy Ensemble, which will feature performances by German national slam champions. The poets will interpret each other’s work,  deliver simultaneous translations in their respective languages and incorporate choreography to perform their work via a third communicative device. Basilo says, “With this show, and this season, we’re trying to illustrate how far performance can go, how far slam can go,” Basilo says.  “We’re putting poetry on bigger and bigger stages.”