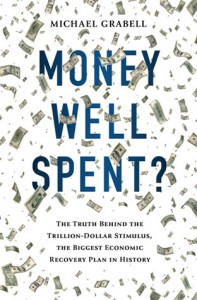 The ink of President Barack Obama’s pen was barely dry on the 2009 American Recovery and Reinvestment Act before the $787 billion stimulus package was already a political football. For many Democrats and economists like Paul Krugman, it was too little and nearly too late, but it was too much for Republicans who wanted to put the brakes on “big-government” spending, and who ever since have habitually inserted the words “job-killing” before any Democratic spending initiative. Thus the battle lines remain drawn.

Given the excessive rhetoric surrounding most discussions of the effectiveness or ineffectiveness of the plan that was supposed to restore the American economy and plummeting employment, ProPublica reporter Michael Grabell’s evaluation in “Money Well Spent?” is as accessible and even-handed as we’re likely to see.

The upshot may be that by the time the package went into effect it succeeded in slowing unemployment but was not sufficient to reverse it. But in the face of intense partisan criticism, “things could have been so much worse” is hardly a battle cry dramatic enough to rally around.

Very usefully, Grabell carefully outlines America’s economic condition during George W. Bush’s final year, when the economy was already faltering as the financial system went off the rails in the fall. In retrospect, the president’s assurances that things would get better ring hollow and his modest economic proposals—of course, again incorporating tax cuts—seem astoundingly meek. Were it not for the bipartisan bank bailout and the stimulus package, we might well be calling the proposed measures “Hooverian.”

Clearly the effect of the stimulus package was a mixed bag. Both its conception in law and its execution were plagued by the Obama administration’s rookie mistakes. In a stab at bipartisanship, the administration incorporated concessions to Republicans that remained despite their bailing on the final vote.

But Grabell suggests that during the transition between presidencies Obama could have insisted on the dire necessity of a larger stimulus package than the one nitpicked over later, on the order of $1.2 trillion. “The incoming administration could have led more from the outset to ensure the bill was quicker, more targeted, and written with Republican support,” Grabell writes. “The president and his aides could have tackled criticism head-on instead of letting it fester.

“They could have taken advantage of a rare supermajority in Congress to deal with jobs and deficits before the political winds shifted.”

Further, once the package was in process, the nation and economy might have been better served if “the president and congressional leaders had focused on long-term infrastructure and energy bills instead of health care reform in 2009 and 2010.”

One economic adviser had suggested breaking the plan into two bills and phases, the first focused on emergency, targeted measures and the second on longer-term economic reinvestments and improvements.

Grabell reports on economic conditions in communities across the country hit hard by the recession, and returns to them to analyze the effects of the plan; here again, the results were mixed. Often, existing government funding formulas undermined what could have been better targeted spending; high-employment areas often received disproportionately more money than those with high unemployment. Some projects like weatherization took too long to get traction. Many programs were badly administered.

There were some real successes, including actual infrastructure and clean-energy improvements (despite a couple dramatic failures of the latter showcased by Republican critics). Despite the dismal unemployment rate throughout, some economists say the unemployment rate could have hit twelve percent and stayed there.

America may well grub its way back to economic health, in which case both proponents and critics of the stimulus plan will surely claim victory. But sadly, perhaps, the plan may ever be seen as a lost opportunity, a failure of vision. Here, Vice President Joe Biden—often the president’s “enforcer” in executing the plan—is given almost the last word: “We’ve become too incremental, in my view, in everything we do.” (Martin Northway)