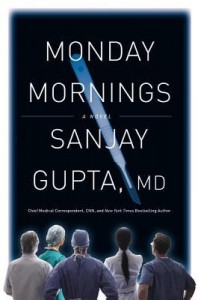 We pick up fiction written by doctors—Anton Chekhov, William Carlos Williams,  Abraham Verghese—hoping to find a sharp and illuminating perspective on the brevity and intensity of life and a frank but compassionate portrait of humanity, including that which is frail, festering or beyond hope. And great writing about being a doctor (most notably Verghese’s “Cutting for Stone”) lets the reader into the doctor’s mind. Just enough so that we begin to understand the details, so that we feel—but don’t become frustrated by—the complexities that are out of reach. All the while, we must never lose that same sense that we feel in any other great novel, while delving into the mind or soul of a character: That the inside of the body, just like the inside of the mind or soul, is unique, unendingly complex and capable of illuminating not only an individual character but our own perception of the world.

There is none of that in “Monday Mornings,” Sanjay Gupta’s first novel. Gupta, a neurosurgeon and assistant professor of neurosurgery at Emory, is most famous for his health show on CNN, column in Time magazine, and two works of nonfiction, “Chasing Life” and “Cheating Death,” both bestsellers. His skill as a journalist is debated—like many a reporter, he’s been accused of oversimplifying issues—but his skill as a novelist should not be. Gupta’s five protagonists are more clichéd than anything on “Scrubs” or “Grey’s Anatomy”: The uptight Asian male neurosurgeon, the good-looking and altruistic male neurosurgeon, the neurosurgeon who’s sleeping with the good-looking one and letting her marriage fall apart, the politically incorrect, divorced and overweight ER doctor and the female heart surgeon in her thirties who’s abandoned any hope of a relationship. There’s plenty of drama, both personal and professional, and for these surgeons, the two are inextricably intertwined. Gupta sets up the ethical cases and the questions of work-life balance but fails to deliver any surprising outcomes or new understandings.

Gupta doesn’t make up for the flat characters with exciting, in-depth cases that poetically bring the reader into the OR right along with him. A medical take on their inner lives comes off as forced: “Ty was sure he now gave off a whiff of fear, and his colleagues’ olfactory glands three rows up were getting doused with apocrine.” And the medical cases are glossed over and generalized with flat, uninspiring language, even when they come from Gupta’s own field of interest. A brain doctor for twelve years, Gupta writes what any young child could tell you about the organ: “Protected by a helmet of bone, the brain was an organ of mind-boggling complexity and ability.” Perhaps a surgeon should be forgiven for putting pen to paper less skillfully then he puts the scalpel to the skin. But to fail to give readers insight into his own passion for medicine, surgery and the human body, Gupta makes an error that, while not fatal, is certainly regrettable. (Ella Christoph)