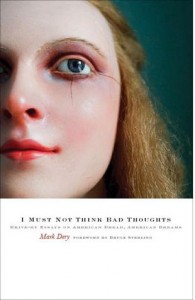 In the classic TV series “The Honeymooners, ” sewer worker Norton (Art Carney) has taken up bird watching and, with binoculars around his neck, shares a park bench with his friend, the bus driver Kramden (Jackie Gleason). Kramden wants to know why anyone would take up bird watching.

“Why shouldn’t we watch birds?” Norton responds. “They watch us, don’t they?”

Norton spots—“by Jove!”—a Yellow-bellied Sapsucker, and remarks they’ve never been seen in New York. He starts making a note for the birding society. Kramden asks sneeringly, What makes you think they’re going to believe you?

In a post-postmodern era of 24/7 news coverage and “watchers” in broadcast and Internet media telling us what we should think about what we’re watching, an observer like Mark Dery finds American culture a target-rich environment. Homing in on hypocrisy and flimsy logic, in his essay collection “I Must Not Think Bad Thoughts” he names names but has no hesitation about naming places, either. With an eagle’s eye for Emperor’s Clothes of whatever plumage, he dresses down the culprits, but beware: your feathers may be next.

In the book’s foreword, Bruce Sterling notes that Dery is “a colossally erudite fringe character who taught at NYU,” peculiarly equipped to comment on our “dark, networked, baroque times dominated by massive fraud and rank political delusion, a Gothic high-tech period.” Brandishing “a Diogenes lantern as the smoke thickens on every side,” writes Sterling, Dery “has the ruminative tone of a Havel-style dissident living in truth amid ever more brazen lies.”

One might be tempted to suggest he is sort of a left-leaning H.L. Mencken for our age because his harshest invectives are flung at the Far Right, but this is because it clings most stubbornly to ideology impenetrable to criticism of any kind.

Sarah Palin and media bully Ann Coulter are perhaps too facile targets, but in “Dead Man Walking” (an unexpected sendup of our cultural fascination with zombies) Dery likewise lashes out at the “vampires” whose “neoliberal capitalism is the official religion … where the Myth of the Level Playing Field is impervious to fact—for example, that 80 percent of the nation’s wealth is held by the top 20 percent of the income pyramid, or that the CEO who, a decade ago, raked in 30 times the average worker’s salary now makes 116 times that worker’s income…”

Perhaps unsurprisingly, Dery reveals in “Mysterious Stranger” that he is a fan of the “real,” tough social critic Mark Twain as opposed to the sanitized “Pepperidge Farm” image, and gets it right when he shows that the tough Twain was there for anyone to read or listen to long before publication of his unexpurgated autobiography two years ago.

Dery takes aim at the humorless Camille Paglia in part because she rages against Twain’s dislike of the “witty” Jane Austen (Paglia perhaps overlooked his more entertaining evisceration of male author James Fenimore Cooper); Dery suggests she misreads “Huckleberry Finn” by lumping it with the tamer “Tom Sawyer,” totally missing the very real darkness of both because she says Twain’s later-life “gloominess” proves the hypocrisy of the novels’ supposed “Wordsworthian benevolence.”

Dery is lovely in recognizing that Paglia and others miss that Twain’s writing (especially in Huck Finn) “dramatizes our essentially double nature—the weird mix of sentimentality and cynicism, idealism and rough justice, gregariousness and loneliness that is an essential part of the American genome.… he knows all of our secret places for the simple reason that they’re his secret places, too.”

Twain “captures our Hallmark sentimentality at odds with our love of violence, our Reaganesque nostalgia tripping over the half-buried bodies of our genocidal history; our lip service to Christian ideals making a jarring noise against the ugly reality of our bigotry.” Yet, Twain does not abandon his fundamental humanity as, for example when Huck resists gloating over the Royal Nonesuch “rapscallions” being tarred and feathered, musing instead that “It was a dreadful thing to see. Human beings can be awful cruel to one another.”

A whole section here is devoted to essays on the Digital Age. Dery sees its significance, but rejects the gee-whizzers’ insistence that it necessarily heralds a new, improved age of journalism. Money and the powers-that-be too quickly co-opt any medium that begins idealistically. Rather, while a host of bloggers has promised a democratic counterweight to the ranting heads of big broadcast, Dery sees most bloggers as uninformed individuals merely magnifying the clutter.

He reserves his praise for two types of online communicators: very rare journalists like Chris Allbritton and Kevin Sites, who risked their lives reporting the Iraq War; and forthrightly eccentric blogs (or bloggers) like Boing Boing and Dangerous Minds who sample our nation’s communication in an almost stream-of-consciousness way that we learn to trust. Some of the best blogs, he writes, are the “inscrutable products of borderline obsessive-compulsives.” The above “offer a bracing alternative to the market-tested, advertising-driven mainstream media.” Writing from his own border, Dery’s essays are similarly bracing, sometimes infuriating, and (warning) may become a habit-forming guilty pleasure. (Martin Northway)