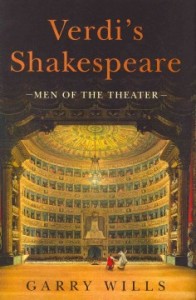 “If music be the food of love, play on.” So the lovesick Duke Orsino declaims at the top of Twelfth Night. He is speaking of his unrequited feelings for Olivia. But he could as easily have been speaking about opera. For opera is packed with lovers, both on stage,  and off.

Onstage the lovers suffer a thousand slings and arrows, before they suffer and die singing at the top of their lungs. Even those who die of tuberculosis, like Verdi’s Violetta, in “La Traviata,” sing like sopranos in their prime as they cough and cough, and fade away.

Offstage, opera lovers endure the torment of unrequited love, pining for brief glimpses of their love and spending their time away brooding on their memories and reviewing the myriad bits of information they collect about their love objects. Count professor and political writer Garry Wills among this number.

Best known for his books on those two great forbidden dinner party topics, religion (he is a devout Catholic) and politics (he began as a William F. Buckley acolyte and has over his career drifted leftward), Garry Wills proves in this book how a devoted, and keen-eyed, opera aficionado he truly is.

He begins with Verdi’s earliest adaptation, an 1847 take on Macbeth. In discussing this work, Wills first provides us with a brief, but thorough, discussion of Shakespeare’s play. He places it within Shakespeare’s canon, and provides a fascinating social context for the original play. He also compares Shakespeare’s play with the opera’s libretto (by Francesco Maria Piave, with additions by Andrea Maffei).

Then in Wills’ trademark readable, well-researched prose, he takes us through Verdi’s creative process, the composition, the casting, rehearsals and finally opening night (and the opera’s afterlife). Verdi was notoriously exacting, both in casting and in his idea of how his vision should be realized. And Wills captures well the brilliant, infuriating Verdi in all his crazy-making perfectionism.

Again and again, we see Verdi fighting against the casting of habit-bound singers who sacrificed subtlety for quick applause, or who would rather resort to popular singing tricks than use their talents to deepen the characters they play or advance the story.  These comic war stories—of Verdi pursuing excellence and fighting against the merely pretty good—provide a running theme in the book.

Wills repeats the pattern he sets in the section on Macbeth for Verdi’s two other Shakespeare adaptations: “Otello” (1887) and “Falstaff” (1893). First he delivers fine explication of the Shakespeare original. Then he connects that original material to Verdi’s work, chronicling the creation of the adaptation and providing details of the rehearsal process.

Those familiar with Wills’ political works will recognize his Jesuitical thoroughness and economy. The book is only 225 pages long, counting a detailed nine-page index. Yet, one finished this volume feeling like you have completed a long, fine intellectual journey. Wills uses the lens of these three works to study Verdi’s life and work, and to bring us to a richer understanding of how deeply Verdi turns music into the food of love. And why, nearly 200 years after his birth in 1813, we are still asking it, and him, to play on. (Jack Helbig)