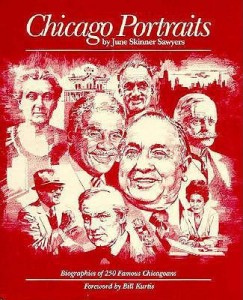 Chicago is a relative whippersnapper among the great cities of the world, but its persisting roll-up-the-sleeves attitude toward life and work may be why it has produced so many high achievers in all fields of human endeavor, including politics and crime (in which many have proved ambidextrous).

So it was no small mission June Skinner Sawyers set for herself in winnowing that list to about 300 and creating trenchant but sufficiently thorough biographies of each. The result has been spectacularly successful. In her “Chicago Portraits” she has crafted an indispensable resource for anyone who loves Chicago history. The grace of her writing also makes it a pure pleasure for browsing; her volume will make you smarter just by being in your home.

In his foreword, Rick Kogan—whose father, the late journalist, historian and author Herman is justifiably among those included here—is right on the money in applying to Chicago the Southerner William Faulkner’s observation, “The past is never dead. It’s not even past.”

The archaeology and sociology of a living city are such that history is renewed every day. “Chicago’s past is always with us,” writes Kogan. “There is the unmistakable voice of Carl Sandburg in the poetry of those on stage at the Uptown Poetry Slam that holds forth on Saturday nights at the Green Mill. There’s Muddy Waters alive in the fingers of a young West Side bluesman.… History courses through the city.”

And just as in life the high and low roiled together, now-deceased notables elbow one another for space here, “attorney for the damned” Clarence Darrow with the surely damned Al Capone, ballet’s Ruth Page and the blues’ Koko Taylor with “Bozo” Bob Bell. But the author tips her prejudices in making ample room for literary figures like Poetry’s Harriet Monroe who left their imprint on the Windy City.

And pride absolutely meets prejudice when one of these figures resonates with Sawyers’ own Scottish heritage. Many of us know of Norman Maclean through the voice of Robert Redford in his film version of Maclean’s “A River Runs Through It,” but Sawyers reminds us that what may be as close to a perfect story as we shall ever read succeeds because of its ideal marriage of language with Maclean’s Scots-Presbyterian roots. Norman Maclean and his brother, Paul, learned fly fishing in Montana from their minister father, practicing casting “Presbyterian style” to a four-count beat on a metronome.

In decades of his masterful teaching of English literature at the University of Chicago, Maclean certainly passed on some of the wisdom of his father quoted by Sawyers here: “To him, all good things—trout as well as eternal salvation—come by grace and grace comes by art and art does not come easy.” Certainly the long road to Maclean’s creating his single book of fiction amply proves the point.

Sawyers acknowledges the difficulties of trimming her list of biographies, mentioning several names she reluctantly omitted. This reviewer agrees with her on some alternative selections but not on others. She does not, however, mention Milton Friedman, and his omission here is an egregious one; not only did he establish the “Chicago school” of monetary economic policy, but his own selection for a Nobel Prize helped pave the way for a whole host of other winners in economics at the University of Chicago.

Also, although Joseph Cardinal Bernardin receives deserved treatment here, his predecessor as cardinal of the Chicago archdiocese, John Patrick Cody, is ignored. Cardinal Cody was by no means universally loved in Chicago (just consult Reverend Andrew Greeley), but his powerful impact is undeniable.

Others will have additional suggestions. It would have been nice, for example, to have included the offbeat but public personality Lar Daly, the populist-patriot Don Quixote of perennial presidential candidates (all alliteration intended). Also missing (and here my own South Side prejudices are showing) is John J. “Jay” Berwanger, first winner of the Heisman Trophy.

We can all hope that the success of this volume will assure publication of a bigger, revised edition. Of course the penchant of even the great for dying practically assures it; I pray long life for Ms. Sawyers so she can eloquently document them. (Martin Northway)