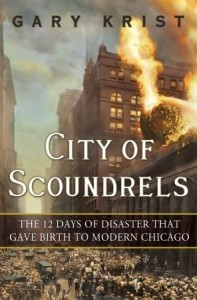 As Nelson Algren taught us, since its founding Chicago has been a city of hustlers and squares. Such a straightforward dichotomy between inhabitants makes the generation of narrative easy: conflict is inevitable while shades of gray are few. As a reader of books on Chicago history, you know for whom to root. If you happen to be both a reader and a Chicagoan, then you also know that the person you’re rooting for—usually the square if you’re a moral sort—is going to lose. The tango between the hustler and the square has provided a structure for two of the more recent and popular books dealing with the city’s past—Erik Larson’s “The Devil in the White City” and Karen Abbott’s “Sin in the Second City”–and it turns up again in Gary Krist’s “City of Scoundrels: The 12 Days of Disaster that Gave Birth to Modern Chicago.”

Krist’s book invites comparison to Larson’s and Abbott’s. It seems to long for that comparison. One can imagine his editor and publisher, like Algren’s hustlers, having “dollar signs for eyes.” Like the other books, “City of Scoundrels” tries to tie together several disparate stories through a kind of narrative sleight-of-hand, although Krist is at a slight advantage since the events he’s describing all occurred at more or less the same moment. “City of Scoundrels” focuses on a brief period in 1919 when a combination of racism, crime, labor strife and political malfeasance nearly caused the city to implode. It weaves together the stories of the Wingfoot airship disaster, the kidnapping and murder of six-year-old Janet Wilkinson and the violent race riots on the South Side that left dozens dead and hundreds wounded. One would expect a book so focused on a brief period of time—twelve days—to have a certain texture and depth. Instead, it reads a lot like Larson’s and Abbott’s books: engaging on the surface but hollow at the core.

The hustler in “City of Scoundrels” is William Hale “Big Bill” Thompson, the city’s last Republican mayor, known for his flamboyance, corruption and odd obsessions, but also for his cultivation of the African-American vote, which led him to make some rather brave statements about racial equality. The book also has its square: Illinois Governor Frank Lowden, a suburban patrician with presidential aspirations. Thompson and Lowden emerge as the only fully realized characters in “City of Scoundrels.” Ida B. Wells, Clarence Darrow, Ring Lardner, Jane Addams and Carl Sandburg all turn up, but are given little to do. Emily Frankenstein, from a wealthy family in Kenwood, offers the perspective of someone not regarded as historically or culturally significant, but she is so tangentially involved with the main events of the narrative that her inclusion seems merely the result of her having kept a diary.

In Larson’s book, all the famous names pushed the story along and the less famous names humanized the World’s Columbian Exposition, an event that seemed almost inhuman in its scale. That book’s hustler, H.H. Holmes, seems like a bit of a con on the reader; the serial killer had pretty much nothing to do with the World’s Fair. But “City of Scoundrels” does one worse; it doesn’t even try to make its disparate elements hang together. The fragmented narrative along with flat characters leaves the impression that there isn’t much of a story to tell.

Which is a shame, because the story at the center, the 1919 Race Riot, is worth telling. On July 27, Eugene Williams, an African-American teenager, and a few of his friends put a makeshift raft out on the lake. Although segregation did not exist as a matter of law, it did as a matter of practice. When the boys’ raft drifted into what was considered a whites-only section, a man named George Stauber began throwing rocks, one of which struck Williams in the head. The boy slid off the raft and drowned. Tensions that had been growing between black and white communities since the end of the First World War were transformed, almost in an instant, into acts of wanton violence.  By the time the riots subsided, thirty-eight people were dead and over five hundred were injured. The ugly legacy of the riots reaches all the way into the present and can be seen in incidents like the 1997 beating of Lenard Clark, a thirteen-year-old boy who, like Eugene Williams, wandered into an area where he wasn’t welcome.

Clark doesn’t get a mention in “City of Scoundrels.” His story doesn’t occur within the twelve-day period, and Krist doesn’t seem all that interested in longer legacies or deeper histories. And why should he be? Like Larson and Abbott, like Liebling and Kipling before them, he’s merely passing through, with “dollar signs for eyes.” (Paul Durica)

“City of Scoundrels: The 12 Days of Disaster That Gave Birth to Modern Chicago”
By Gary Krist
Crown, 368 pages, $26