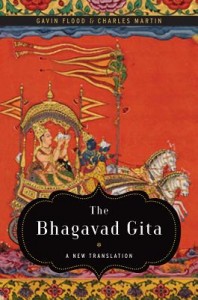 “The Bhagavad Gita, ” a small part of the Sanskrit epic “Mahabharata, ” is a conversation in verse between the central Hindu deity Krishna and the warrior Arjuna, who is reluctant to go to war against his own family and friends. Torn between doing his duty as a warrior and his wish not to fight against those he loves, Arjuna tirelessly questions Krishna not only about why he should go into battle, but also about the meaning of life and the path to enlightenment.

Hindu professor Gavin Flood and poet, critic and translator Charles Martin’s new translation balances the philosophical, spiritual, historic, poetic and narrative forces that together make the Gita such a challenging and enthralling text. There are big philosophical questions (“What undergirds all creation?”) and enchanting details (“all beginnings are enveloped / by error as fire by smoke”). The Gita is intended to act a guideline for right action, and while contemporary readers may not, like Arjuna, accept Krishna’s responses, they will likely reap some reward, if only a noteworthy turn of phrase. Others may find a new perspective or challenge to action: perhaps to become less attached to the material world, or to become braver or less impatient.

Krishna challenges Arjuna—and all those seeking enlightenment—to become “One from whom the world does not shrink, / one who does not shrink from the world.” “The Gita,” write Flood and Martin in the introduction, rejects the Buddhist and Jain concepts on non-action and renunciation. In order to be good, we indeed must act. Arjuna must go to battle against those he loves.

And so there is little question that Western Pollyannas seeking nonviolence and egalitarianism will be disillusioned by “The Bhagavad Gita.” Like many other ancient religious and spiritual texts, both Eastern and Western, there are deity-endorsed enemies and the requisite violence against them. But even atheists and pacifists will be captivated by Flood and Martin’s translation of these revelatory moments:

Like moths that hasten onward till they enter
the blazing flame in which they find destruction,
just so the worlds, in hastening to enter
your gaping mouths, all seek out their destruction.

Attaining enlightenment, Krishna warns, is not easy, but reading about it, at least, can be beautiful. (Ella Christoph)