Adam Levin’s debut novel, “The Instructions,” aimed high: Over a thousand pages, with missives on religion, war, identity and Philip Roth. It was an outstanding hunk of fiction, and elicited from critics all the superlatives (and expletives) you might expect a work of such length and power to receive. If there was anything bothersome about the novel, though, it was the slight—yet frequent—sense that Levin hadn’t quite divorced himself from the writers to which he’s been compared and clearly admires.

In his excellent new collection of short stories, “Hot Pink,” Levin hurdles over that problem. While proudly displaying his literary lineage, Levin–who teaches at the School of the Art Institute–also wades out into fresh waters, offering up absurdity, farce and near-academic dissection in an eclectic array of voices, all at once recognizable and entirely unique.

Set mostly in the Chicago area, and swimming through the murky waters of social interaction, Levin’s stories feel a bit like John Hughes’ scripts rewritten by David Foster Wallace. Drug-addled teenagers bouncing from garage to fast-food establishment, a suburban family’s potential dissolution due to an inventor patriarch bent on saving the world, toughs trying to parse romantic codes—if Levin had written that scene in “Sixteen Candles” where Anthony Michael Hall drives Michael Schoeffling’s girlfriend home in his father’s Rolls, there’d probably be a solid three pages spent unpacking both the symbolism and ethics of the act. And we’d be totally cool with it.

In an email exchange, Adam Levin talked with Newcity about his new collection of stories, his life in Chicago and the best way to die. 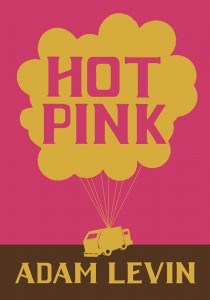 There’s a scene in “Hot Pink”’s opening story, “Frankenwittgenstein,” where the narrator comes out to his father–an inventor who has been neglecting the family in favor of work. The father says: “Ditch that boyfriend and find yourself a good one. Adopt a baby girl. Teach kindergarten. Don’t worry about humanity. Love humans, boy-o, be close to them. Let humanity work things out for itself. You’ll be a happy man.” It’s a beautiful thing for a father to say to a son, in a very beautiful story. Is that, to an extent, how you feel about art? Is there a parallel to be drawn between a man trying for years to create a doll with a working intestinal tract and, say, a 1,000-plus page novel like “The Instructions”?

Ha! Well, no, not so much. Finishing the doll turns out, for the inventor, to be kind of a compromise for a presumably higher, more personal good (the benefit of his family), whereas I wouldn’t ever have let “The Instructions”  be published if I thought it wasn’t everything it needed to be. Works of fiction, I think, should be fully realized—at least by the people who make them. To half-ass it on a novel is cowardly, and maybe even a little bit despicable, if something can be said to be a little bit despicable. Better to call it “despicable in a mostly harmless way,” maybe.

Like “The Instructions,” most of the stories in your collection take place in the Chicago area. The setting seems almost to be another character here. Tell us a little about your life growing up in Chicago. Do you share any experiences with your characters?

I love Chicago, and I’ve had a great life here—grew up in Buffalo Grove and Highland Park, moved to Wicker Park when I was seventeen, then Logan, Rogers Park briefly, then landed in Ukrainian Village, saw a million shows at the Fireside, went to UIC and U of C, hung out at Urbis Orbis a lot, then Jinx, now Atomix—but I don’t actually do a whole lot in the way of thinking about setting. My stories are set here pretty much by default. I’m sure I have a lot in common with my characters, but not nearly as much as I don’t have in common with my characters. Most of us do seem to have a thing for redheads, though.

After “The Instructions” came out, critics seemed to want to compare it to either David Foster Wallace or Philip Roth. It seems to me that every novel that pushes the 1,000 page mark gets the DFW comparison, and every funny novel about Jewish identity gets the Roth nod. Are the comparisons something you think about? If yes, are they flattering or frustrating? 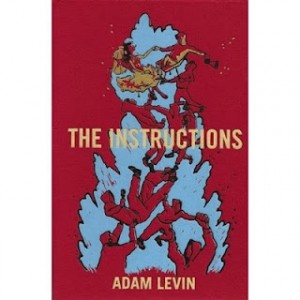 At the risk of asking too obvious a question, how is writing something as long as “The Instructions” different than a collection of short stories? Does the process change?

On an hour-to-hour level, the process didn’t change much: I’d sit down, take forever to write a sentence, then forever to write another, and then I’d delete nearly everything I took forever to write. On a day-to-day level, though, it was a lot different. When I was working on “The Instructions”—with the exception of a couple or three three-week stints during the nine years it took to write—it was the only thing I worked on, whereas when I was working on the stories, I felt free to put any given one down for days, months, even years at a time if I felt like working on a different one.

I think your stories strike a good balance between cleverness and very straightforward emotional honesty. Is that something you consciously think about when you’re writing? That is, do you ever think, “I need to back off one or the other,” or does everything just kind of come out that way?

I definitely try to keep an eye on any “clever” impulses I might have, and then murder them. I grew up reading and loving a lot of Vonnegut, then later Salinger and Wallace, and, as a result of that, my brain tries, by reflex, to address most narrative problems that arise with “clever” metafictional solutions, which are often (by no means always, but often) emotionally dissatisfying copouts. On those rare occasions when, despite my homicidal efforts, the “clever” impulses survive, I trust they’re better than merely “clever,” take them out for drinks, and then we usually end up making out on the beach or egging houses in Ravenswood Manor or something.

A lot of the characters in these stories are smarter than they think they are. They aren’t necessarily book-learned, or known by others for their intelligence, but they seem to have this very deep, very innate understanding of human dynamics. Are they unique in that way, or do you feel that all of us, deep down, are social semioticians?

I think people like to think about people, and when the people people think about are close to them—or would be close if the thinker could manage to get them so—the thinking gets pretty complicated. I don’t know that many people articulate their thoughts about other people and their motivations in as detailed a fashion as some of my characters do, but I like to imagine it happens sometimes at least.

What’s next for Adam Levin? Anything in progress?

Hard to say what’s next. I’d like to write a short novel, and I’ve got a couple things going, either of which could turn into a short novel, but that doesn’t mean one of them will, or that a third thing won’t grab my attention, or that I won’t, before there has a chance to be a what of any nexty-type substance, die of heartbreak or headshot or some fateful mistake I make that’s engendered by the same kind of thinking which prevents me from being able to decide whether I’d rather go by headshot or heartbreak. Like maybe I’ll try to retrieve a puppy from the middle of a street down which a car is speeding, and I’ll determine I can make it, and at the point at which I make that determination I’ll actually be correct, except then I’ll hesitate for some reason, but after I hesitate I’ll chase the puppy anyway, all mistimed and graceless, and then… no next nothing for Adam Levin. Which is better than starving to death, I guess. No. I know. It’s better for sure. So’s death by headshot or heartbreak. Better than starving to death, I mean.