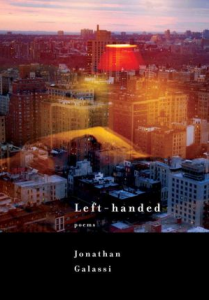 “Left Handed” is writer, publisher and translator Jonathan Galassi’s third collection of poetry. Its epigraph, taken from Elizabeth Bishop’s “The Fish, ” reads, “and then I let the fish go.” Galassi uses this famous closing line from Bishop’s well-known poem to argue that letting go is also a beginning. A candid and intimate meditation, this book of poetry invites the reader into the regret, the longing and the celebration of a narrator beginning to live fully “in the few long perfect days we get / before the drought and then the frost set in.”

The book is divided into three sections: “A Clean Slate,” “The Crossing” and “I Can Sleep Later,” each of which study the narrator’s emotional landscape upon transitioning into middle age. The poem “Young” speaks openly of regret:

I tried, and each attempt was a fiasco.
I yearned, but every love of mine was wrong.
I needed, and the shame was overwhelming.
I failed, and so I hated being young.

These poems confess the narrator’s regrets in order to let go, to break down and undo decades of yearning and of shame in order to finally live. Galassi spends these poems chronicling disintegrations: his youth, his spring and his marriage, throughout which his dexterity as a poet is exemplified. Ranging from the haiku-esque subtlety of “Thalictrum and Cimicifuga” to the four pages of narrative sprawl comprising “Ours,” Galassi’s poetry is a consistently surprising blend of formalism and confession.

After dealing openly with regret, the narrator is able to more fully embrace the possibility of hope:

You can hear
hope in how a tensed
wire thrums, in branch-
es cracking, breaking,
breaking free, saying a
man can change, can
tame his weather, set
his house in order,
true his tone.

Galassi’s ear is flawless. The unity of sound and subject is remarkable. This is a poet who understands and appreciates the complexity of language. This is a poet who engages himself fully in the total craft: from the line, to the stanza, to the poem, to the narrator, each element is carefully considered. Yet even more important than a triumph of craft, “Left Handed” is a startlingly brave book. Galassi never shies away from the painful. He does not hide behind his narrator. Instead, he uses this book as an opportunity for connection between speaker and reader. For a writer known for his many academic achievements, “Left Handed” is Galassi’s most personally human one. (Raul Rafael Alvarez)