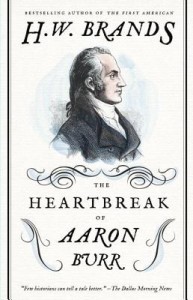 Although Aaron Burr was not convicted in his supposed military conspiracy to acquire territory in the Southwest in the early nineteenth century, his reputation has passed down to us as tainted, almost on a par with that of Benedict Arnold.

His earlier killing of Federalist leader Alexander Hamilton in a duel further clouds his character. In truth, the political fortunes as well as economic prospects of the former vice president of the United States were already in steep decline, but the infamous affair at Weehawken, New Jersey, accelerated the process.

The brilliant, ambitious Burr was often an enigma even to his contemporary countrymen, but he was not a soulless man, as University of Texas historian H.W. Brands demonstrates by refracting the events of his life through the lens of Burr’s unusually close relationship with his daughter. In his brief but compelling “The Heartbreak of Aaron Burr,” he absolutely delivers on the publisher’s promise of a series of “American Portraits:” that they are “tightly written, vividly rendered accounts of lost or forgotten lives and crucial historical moments.”

His only daughter, Theodosia, was already a daddy’s girl at the time of the death of her mother—who was substantially older than her father. But that death cemented the bond between father and daughter. Father Aaron saw that daughter Theodosia enjoyed every advantage of education then available for young females. Unquestionably Burr’s exposure to these two women in his life contributed to his own progressive attitudes toward the potential of women.

Early on in their relationship, physical separations of father and daughter—inevitable in Burr’s political career—sometimes produced crossing torrents of cards and letters, many of which are reproduced here. The pair deeply regretted any separations, and it is striking how precocious Theodosia’s communications were from an early age; as she grew older the exchanges came to seem almost more like those of husband and wife than those of father and daughter.

At the core of Brands’ account of the arc of Burr’s career is a cautionary tale demonstrating the twin adages that idle hands are the Devil’s workshop and that one’s reach should not exceed his grasp. One might add: If you are the vice president, stay in the good graces of the president of the United States, especially if he is of your political party.

By Brands’ account, Burr was a capable leader of the Senate, but the Federalists were already hostile to him, and the animosity of President Thomas Jefferson sealed Burr’s prospects for advancing in the otherwise burgeoning Democratic Republican party.

Both Burr’s wealth and political career spiraled downward, in part through a series of bad choices that grew more desperate and ill advised. Through it all “Theo” remained his unwavering cheerleader, even after she moved to South Carolina with her wealthy young husband, Joseph Alston, and bore a son, also named Aaron.

Near the nadir of Burr’s experiences she writes him, “I witness your extraordinary fortitude with new wonder at every new misfortune. Often, after reflecting on this subject, you appear to me so superior, so elevated above all other men; I contemplate you with such a strange mixture of humility, admiration, reverence, love and pride, that very little superstition would be necessary to make me worship you as a superior being: such enthusiasm does your character excite in me… my pride is our relationship. I had rather not live than not be the daughter of such a man.”

In the same letter she writes with pride of the education of Burr’s grandson. But so close were father and daughter it is hardly surprising that her husband appears to have felt some jealousy; the southern climate also strained Theo’s health, so there was more than one reason for him to resist his wife’s desire to travel seaward north to meet with her father.

To tell more would be a true plot spoiler. But the breaking of Aaron’s and Theo’s bond is, truly, heartbreaking. Brands proves that the politician, duelist and adventurer Aaron Burr was, after all, very sadly, all too human. (Martin Northway)