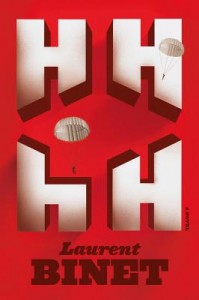 One of the most remarkable things about “HHhH” is announced on the cover, although it’s almost lost in the graphic extravaganza of all those aitches: It’s “a novel.” Laurent Binet’s exhaustive retelling of the assassination of Reinhard Heydrich is completely factual, interspersed with Binet’s own meta-commentary on the difficulties of re-telling history. With post-James Frey sensitivity, Binet frames Heydrich’s rise to power within the Third Reich, his devastating impact on the Czechoslovakian people when he was stationed in Prague and the intrigue of the two assassins as nothing more than “historical fiction.”

Binet’s hard-line approach to the designations of fiction versus nonfiction acknowledges that to tell a story is to change it—he faces the impossibility of telling this story without imparting his own biases and influences and the inevitable factual mistakes that might occur. “I just hope,” he writes, “That, however bright and blinding the veneer of fiction that covers this fabulous story, you will still be able to see through it to the historical reality that lies behind.” It’s interesting to compare this book to the best-selling book “The Immortal Life of Henrietta Lacks.” Local writer Rebecca Skloot unabashedly inserted herself into the ongoing drama of the Lacks family, altering the course of history for them, and also allowing herself to imagine some of the events and conversations of poor Henrietta before her death from cervical cancer.

The rare bits of dialogue and imagined emotions Binet inserts are few and far between, preceded and followed by pages of intellectual hand-wringing. While the way Binet tells the story feels fresh and original, he’s certainly not the first writer to play with fiction and nonfiction in this way. Jeanette Winterson frequently defends her first-person narratives with their relation or influence of her own autobiography—her search for authenticity is what matters (although, coincidentally, all of her books are labeled as fiction, except for her most recent autobiography). Dave Eggers has also published fact as fiction in “What is the What” with a careful introduction about its factual content.

Aside from all this introspection about truth and influence, however, is a remarkable story. Two men train for months, parachute into enemy territory, plot an assassination against the “Butcher of Prague” and then fight for their own lives. It’s full of gripping intrigue and building anticipation, split into no less than 257 short chapters. One chapter is told in exhilarating second person: “You join the special forces and are trained in various grandly named castles all over Scotland and England. You jump, you shoot, you fight, you throw grenades. You’re good. You are extremely charming. You’re a good soldier and the girls love you. You flirt with the young women. You drink tea at their parents’ houses, and their parents think you’re wonderful. You continue to train for the most important mission that any country has ever entrusted to only two men. You believe in justice and you believe in vengeance.”

Further on, the reader is put in the horrific position of reading a second-person narrative from Heydrich’s point of view. Those are the chapters that remain in memory; that, and a higher standard for any historical fiction or nonfiction than you’ll ever encounter again. (Kelly Roark)