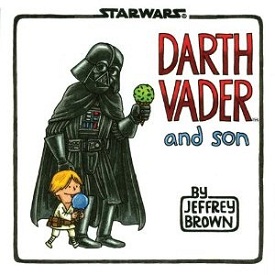 Every father/son relationship has its turning point, when the boy becomes a man, but not every son can say that turning point was when his hand got chopped off by his dad and then things got better. Except in the Star Wars sextology, which at its heart—beneath all the outerspace battles and cosmic samurai hijinks—is about a man reconciling with the adult son he never knew he had.

At least that’s the germ of the idea behind Jeffrey Brown’s “Darth Vader and Son,” a collection of one-panel gag cartoons imagining the Dark Lord of the Sith raising young Luke as a single father.

Brown, a Chicago-based cartoonist, made his mark with several volumes of autobiographical comics, but also produced more humorous parodic work like the two volumes of “The Incredible Change-Bots,” a send-up of the Transformers franchise. With Vader, those two different storytelling skill sets come together for a lighthearted look at the difficulty of balancing a career as a telepathic cyborg fascist with fatherhood.

Though it is a Star Wars book, the humor is driven less by the references to the films and more by just the incongruities of an evil space wizard having to deal with looking after a toddler, experiencing those moments that all fathers will recognize. Many of the more direct references come from places, scenes and dialogue from the wholly different context of parenting, such as when on a visit to Mos Eisley, the young Skywalker reminds his dad that he said they would be going somewhere else when he finished his nap. The elder Skywalker replies, “I am altering the deal. Pray I don’t alter it any further.” Another gag almost universal among fathers in its combination of tenderness and annoyance: Vader is laying down on the couch with Luke curled up asleep in the crook of his elbow, thinking “I can’t move my arm.”

“Darth Vader and Son” is a book of humor of heart that has fun with fatherhood and the Star Wars universe as it celebrates them. (Greg Baldino)