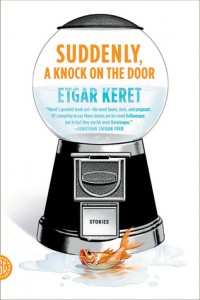 “A black man moved into a white neighborhood.”

“Three people are waiting at an intercom.”

These aren’t jokes but the opening lines of three stories in Etgar Keret’s latest collection, “Suddenly, A Knock on the Door.” Though there is humor and brevity—there are thirty-four stories in the 188-page book—Keret takes an absurd idea or clever observation and strings it into a web of humanity, however dark or bizarre. The black man referenced above, from “Pick a Color,” gets beaten by a white mob, then marries a white woman, then heeds a yellow preacher, who introduces him to a silver God, who, like the man, has been disabled by mankind. The man feels that “suffering just like a god made him feel blessed.” Keret explores in four pages what many authors grapple with in a career.

A woman unzips her boyfriend’s tongue to find another man, better equipped, though ultimately as disappointing as the first. In two stories, divorced fathers make promises they can’t keep to sons; one narrator has been urged by his four-year-old to beat the shit out of his ex-mother-in-law. “Lieland”—in which a man encounters the characters from a lifetime of his lies, with their maimings, cancers and recurring accidents—is a quintessential Keret story.

Author of six bestselling story collections and an award-winning film director, the Israeli writer’s latest has been interpreted by three translators. It’s of note because the pieces translated by Sondra Silverston have a raw directness that stand out. It might be the idioms or the American colloquialisms, but I’m thinking it is the natural use of profanity. Fucking impressive.

The longest story, the twenty-two-page “Surprise Party,” with the strangers at the intercom, doesn’t work. After so many shorter pieces doing so much work in so little space, this one feels the opposite. That’s not to say Keret can’t succeed in longer stories—“Lieland” is the second longest and the most enjoyable in the collection. Keret is not limited by length, theme, tone, variance; he can write about anything, banal or absurd, and hit the profound touchstones of great storytelling. (Robert Duffer)