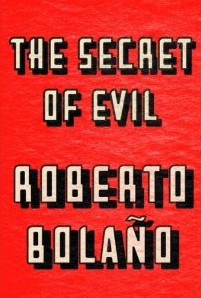 Reading a posthumous collection is usually like sipping broth from a simmering stock: flavorful and evocative, but lacking the richness, texture and depth that would turn it into a full meal. “The Secret of Evil,” a collection of short works found on Roberto Bolaño’s computer after his death, is more like an exquisite demi-glace: hearty and nuanced, a distillation of flavor that becomes the main feature of the meal.

“The Secret of Evil” is pure Bolaño: nail-biting, gut-churning suspense, wily first-person narration, twisted motivations and strange, emotionally charged relationships. The nineteen stories, never more than twenty pages, range from quick sketches to full-blown character portraits ready and waiting for a novel of their own, to tightly wound narratives tense with meta-analysis and dense descriptions.

The most disturbing and enchanting in the collection is “The Colonel’s Son,” a supposed account of a horror film, “pure B grade shlock” the narrator watched on late-night television the night before. The colonel’s son is in love with Julie, who quickly becomes a zombie; the colonel, a widower, watches as his son is sucked in by this femme fatale. Bolaño captures, or, more likely, creates, the stunning pathos of the young man’s senseless love (the heroine-monsters of horror films are never loved sensibly), of the colonel watching his son’s demise and of the zombie’s insatiable desire for raw flesh. It’s “as if you were watching ‘Jurassic Park,’ say, except the dinosaurs never showed, no, I mean as if it was ‘Jurassic Park’ and no one ever even mentioned the fucking reptiles, but their presence was inescapable and unbearably oppressive,” he writes.

There’s “Scholars of Sodom,” an investigation of the supposed Argentinian penchant for (heterosexual) sodomy in which V.S. Naipaul is imagined daydreaming about a Mediterranean shepherd boy, who, having just sodomized a sheep or a goat, falls asleep dreaming of the king sodomizing the queen—“a picturesque vignette that owes more to the erotico-bucolic desires of a nineteenth-century French pornographer than to harsh reality,” the narrator points out.

Some stories are, understandably, more cohesive than others—none of these works were deemed complete or ready for publication by Bolaño prior to his death—and a few read like expert responses to clever writing exercises, like “Labyrinth,” in which a snapshot of European intellectuals (Jacques Henric, Julia Kristeva, Marc Devade and so on) is described, the story strolling down the maze of relationships between the artistes. Was the prompt to choose a photograph, describe it and then imagine the lives of those captured in the image? But, sentence by sentence, even in his creative exercise Bolaño is poetic and insightful. “Crimes” may have started as the answer to “What happens when a female journalist is left alone in her office building with a salesman?” but who cares? The noirish suspense weighs heavy just sentences in, and, like most stories in the collection, it’s tempting to turn to the end just to find out what happens.

Of course, this would be futile: Bolaño’s endings are as intentionally cryptic as his characters. However enticing it would be to attribute his cliffhanger endings to incompletion, it’s likely just Bolaño’s sick sense of narration and humor haunting us from the grave. “The Secret of Evil” has all the intricacy, beauty and unanswerable questions of Bolaño’s finest works. (Ella Christoph)