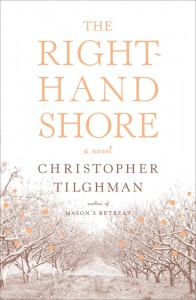 A few years ago I learned that the Manhattan building where I live had probably been a brothel. In the nineteenth century, the street was crowded with them. The big sliding wooden door which divides our apartment suddenly took on an ominous weight. I had always believed it was a very old-fashioned fire door. But maybe it had been used to keep people locked in? It prompted other questions. Most important: Was I cutting vegetables on the site of untold horrors?

I told this story to a writer friend who said it was an interesting tale but completely irrational for me to dwell upon. The phrase, the vibrations of the past, she argued, is just that—a phrase, a metaphor. The air’s molecules do not, she insisted, contain the past. The apartment is not haunted by johns and madams.

What happens, though, when we read a saga, set long ago, about a house haunted by its own past? This is the question prompted by “The Right-Hand Shore,” Christopher Tilghman’s elegant and engrossing new novel. The book chronicles the rise and fall of a family retreat on the Chesapeake Bay. As we begin, the family’s matriarch, Miss Mary Bayly,  is about to pass her home and grounds to a distant relative.

Only someone ignorant of its past would entertain its burden.

Set over one very long day, “The Right-Hand Shore” fills in the reader—and the home’s new inheritor, Edward Mason—on why exactly the land is so poisoned. Readers of the great Southern Gothic works of William Faulkner and Arna Bontemps will be in familiar territory here. “There is a sound of music echoing/Through the open door/And in the field there is/Another sound tinkling in the cotton,” Bontemps wrote in his poem, “Southern Mansion.”

The most important word in that poem might be “And.” Under slavery, homes like Mason’s Retreat were run as if two separate worlds existed: one for slaves and freedmen, another for whites, who grew rich upon this system. “The Right-Hand Shore” looks back into the past and manages to show how fatally entwined these worlds actually were—emotionally, domestically, spiritually.

Mason’s Retreat, as the home is called, used to have slaves, but by the time this story begins they have been sold off, in a horrible dividing of mothers and sons, sisters and brothers. This primordial scene echoes down the generations, inspiring Miss Mary’s father, Wyatt Bayly, to do something unusual in the Chesapeake: He plants a peach orchard and funnels some of its profits into educating Robert, the African-American son of one of his plantation workers.

Even though Tilghman makes it clear as the book begins that whatever happened at Mason’s Retreat went terribly awry, he writes so beautifully that it is easy to forget this prologue. His long paragraphs and the susurrus of Maryland landscape—“water grasses with tufts of white blossoms, wild privet, and scraggly water elm”—weave an intoxicating spell.

The novel’s characters are utterly engrossing. All possess that American familial yen for somehow correcting the mistakes of their own upbringing—of doing better. Yet they are caught in a system designed for stasis. This contradiction creates terrible predicaments that seem designed to bear the maximum amount of pressure on the awful compromises Tilghman’s characters must make.

Wyatt’s marriage grows brittle and dies on the vine, so he plunges his energies into controlling nature with science. His efforts yield fruit, and as a man ahead of his time, he approaches the issue of emancipation with an iron-clad belief in rationality. As a white man, though, he has no concept of what a dangerous thing he is doing by treating Robert like an equal.

The children of Wyatt’s loveless marriage grow up in the antebellum South with different approaches to its broken promises. Miss Mary, like her father, believes in science and progress. When her own prospects of marriage wither, she dedicates her life to fulfilling the retreat’s promise, as if not just her father’s legacy, but that of everyone who had ever lived there, depended upon the land being turned to good use.

Thomas, her brother, who is educated alongside Robert, turns out to be far more emotional and impetuous. Like his father, he has a terrible blind spot for the danger his relationships to the children of black plantation workers put them in. The vicissitudes of his affair with a black woman on the retreat give “The Right-Hand Shore” an urgent, plangent tension, which is not resolved until its last pages.

To write “The Right-Hand Shore” must have required a prodigious amount of research. Occasionally, very occasionally, these factual footnotes show through like the etchings of an original sketch ghosting the final painting. Tilghman writes like a man who cannot quite believe we will appreciate the limitations of this era. “When,” Mary wonders at one point, “would there be a word or concept or a custom associated with marriage that didn’t seem designed to rob her of her dignity?”

Love, no matter when it happens, can be an arsonist’s fire. In a recent review of Hilary Mantel’s fabulous new novel, “Bring Up the Bodies,” James Wood figured that part of why this novel was so successful was that Mantel “proceeds as if authenticity were magic, rather than a science… as if the past five hundred years were a relatively trivial interval in the annals of human motivation.” In other words, the ghosts we encounter spook us not because they are all around us, but because they are us. In its best moments, “The Right-Hand Shore” makes this wisdom felt, and it is all too easy to imagine living in such a compromised world. (John Freeman)