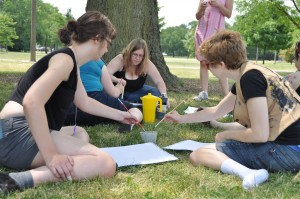 Women are 5.3 times more likely to appear naked in a book than be paid to work on one, according to research by comics scholar and author Anne Elizabeth Moore.

Moore wants to improve the depiction of women in comics, and to create more opportunities for women in comics. For the two weeks leading up to the first Chicago Alternative Comics Convention (CAKE), she put on the second year of the Adventure School for Ladies comics intensive, a small collaborative program open to applicants of all genders that hosted eight individuals this year.

The participants crafted a fifty-six-page comic book with pages inspired by statistics from research on the depiction of women in comics and their presence as creators. Some of the results came from a study of “The New 52,” the relaunch by DC comics of its titles last September in an attempt to fix continuity issues, bring in new readers (especially women) and get publicity for their line. But, according to Moore, the project wasn’t as progressive as some had hoped it would be: In the end, there were a number of women creators at DC, and there were still a number of sexist images in the first few issues.

Moore and her assistant, Nicole Boyett, say that independent comics publishers have just as many problems as corporate publishers with depictions of women and publishing work by women or transgendered creators.

When I visited, the participants were working on panels related to things like copyright law and standardized time. Rachel Swanson worked on a page on the Statute of Anne, one of the first copyright laws.

“Basically,” Swanson said, “thanks to Disney there is no public domain. There’s a fear of being sued for copyright infringement. I make satires of copyrighted characters and that possibility is always there. Fortunately I know Anne and she knows a few good lawyers that could help me, but not everyone does.”

Some of the participants, like Moore, are scholars of comics, not just creators of them. Franny Howes, who publishes the zine “Oh Shit, I’m in Grad School” is pursuing a Ph.D. in Rhetoric and Writing at Virginia Tech, and her dream job is to teach comics. “Whenever I give a talk, I prefer to use comics instead of PowerPoint. They get across what I want to say more easily.”

The message that The Adventure School for Ladies Comics Intensive conveys, according to the participants, is a hopeful one. “For people who think women are under-represented in comics, or someone who had a bad experience in the industry, this book will say, ‘You’re not alone’,” Boyett said.  (Robert O’Connor)