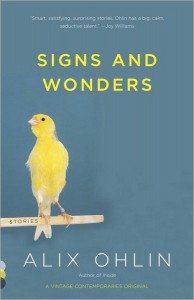 Simultaneously published with her new novel “Inside, ” Alix Ohlin’s “Signs and Wonders” is a short-story collection rich in piercing insights and slow-burning emotional truths.  These are stories about the people you know—maybe the person you are—in recognizable conflicts and moments of grace.  Ohlin’s gift is to take us beyond the familiar into a new territory of layered awareness; these characters never quite end up where you think they will, although their gains and losses along the way are entirely satisfying.

Most if not all of these stories encompass family relationships in all sorts of constellations: mothers and children; ex-wives and ex-girlfriends; stepdaughters and given-up-for-adoption brothers. A high-school music teacher concocts a pregnancy scheme as she breaks the heart of her infertile husband.  An organizational consultant falls in love with an old friend from college, while recommending that his job be eliminated.  Having barely survived the death of his new wife, a man doesn’t sleep with a friendly stalkerish hooker and copes with the aftermath. The thread that connects all of these is how after our expectations of life are upended by grief or desperation, a new form of knowing comes alive—it’s sometimes the most unlikely of alliances, the least probable encounter, which restarts love or at least a willingness to go on. People do change; Ohlin is fascinated by how and when this happens.

Two standout stories include “The Cruise,” in which a woman, raw from betrayal and heartbreak, accompanies her flamboyant aunt on a trip: “Because her aunt was both wealthy and caring, because people seemed to believe that divorce required a period of mourning accompanied and defined by homemade ritual, because Laureen [the aunt] was also kind of bossy and wouldn’t take no for an answer, because she had been named for Laureen and they were therefore considered by the family, and eventually, themselves to be specially affiliated, because the same people who spoke of post-divorce rituals also said that travel broadened the mind, because the world’s wild creatures were disappearing and it was imperative to see them before it was too late, two women went on a cruise to the Galapagos.”

The sharp humor in this high-wire act of a first sentence transforms, by the end of the story, into quiet majesty when all passengers become stilled by the immensely physical presence of sea lions, lying “in a line on the beach, flopped down like cushions, vulnerable and dopey, like overweight puppies.” Another gem is the collection’s title story, which blends English department politics, a husband in a coma, and the bewildering experience of finding a late-in-life new best friend despite never believing you needed one.

Ohlin’s images are unique and often hilarious (a woman describes sex with a much-too-young boyfriend as “a completely new operation, more like coaxing a squirrel out of your garage, everything jumpy, a little feral and uncontrolled”). And while some techniques—frequent flash-forwards and one mannered experimental narration—are less persuasive, overall this collection shines with true-to-life situations and gorgeous writing. It’s an apt title, as “Signs and Wonders” is full of both. (Emily Gray Tedrowe)