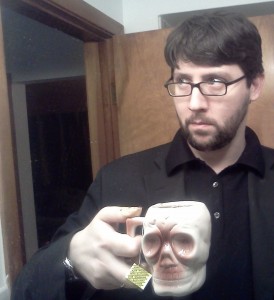 In 2009, Chicago cartoonist Dan Carroll cracked open the first printer’s proof of his self-published graphic novel, “Stick Figure Hamlet.” The book, which began life as a web comic in 2005, stages Shakespeare’s uncut script in simple, evocative line drawings. With an eye for comedic timing, Carroll shifts between slapstick farce and tense drama; he combines a sensitive and humane approach to character with a sly knack for literary subversion—for example, his Rosencrantz and Guildenstern look suspiciously like Bert and Ernie from “Sesame Street.”  I caught up with Carroll on the three-year anniversary of “SFH”’s publication to talk about Shakespeare, comics and how self-publishing has treated the cartoonist and his literary progeny.

What prompted you to write “Stick Figure Hamlet?”
There’s a moment that I think a lot of people have in their mid-to-late-twenties, when you say to yourself, “Stop fucking around and do something with your life, you dork.” Oh, can I say “fucking?”

Yes.
And I thought it would be fun to adapt a serious work in a fun, cartoony style. “Hamlet” came to mind because it has a reputation—which I’ve since decided is undeserved—for being overwrought, dark and melodramatic. As I fleshed out each character’s appearance and mannerisms, I decided they would all have that air of silliness about them. And it just seemed to work. Hamlet was Mister Emo, Prince of Sadville. Claudius was a manically happy horndog. Polonius… well, Polonius practically drew himself.

So I sat down that weekend and drew the first scene. I thought it was hilarious, and decided—being a perfectly sane and balanced individual—to devote the next three years of my life to one joke. 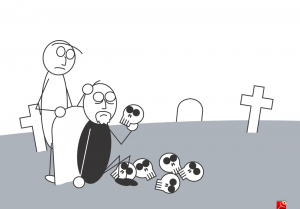 Hey, Hamlet has a lot of jokes.
Hamlet sometimes resembles a Marx Brothers or Bugs Bunny routine. The entire third scene consists of one horrified straight man—well, straight woman, Ophelia—just blanching as her father and brother ask in progressively more inappropriate terms whether Hamlet has gotten in her pants. It’s a hilarious scene. It took very little work for me to bring that comedy out.

I love the way you handle Ophelia’s descent into madness. At any given moment, her scenes are laugh-out-loud funny—but taken together, the effect is quite heartbreaking.
Well, in real life insanity is a dreadful affliction. But dreadful afflictions are comedy’s bread and butter. And Ophelia’s descent into madness was exactly the kind of overwrought emotional plot point I wanted to subvert—in part because it’s the only real tragedy of the play. Here’s this poor girl who does absolutely nothing cruel to anyone. She gets caught in the crossfire of everyone being awful to each other, goes around the bend, and kills herself. I tried not to downplay that tragedy. But how can you not laugh?

When did you decide to publish “SFH” in print?
While I was still posting online, I started getting emails from teachers who were using “SFH” in their classrooms, saying that they couldn’t wait until it was finished because it was a great teaching aid. Now this had two effects: one was that I decided that I had to start taking it seriously. The other was that I realized that I might be able to sell copies once the project was done. 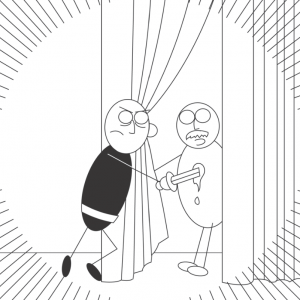 Why did you end up going the self-publishing route?
I went through about five different rounds of SERIOUS INTEREST from agents, all of whom loved the project…and thought it would be perfect for someone else. When I finally got referred back to the agent I had contacted in the first place, I just got exasperated and decided to self-publish.

Has the project been a commercial success?
Regrettably, I am not a household name. But for a self-published, 300-page, black-and-white graphic novel that I put little effort into advertising… “SFH” has sold respectably. And the sales numbers have been marginally higher each year. Sales spike in September and in January, when school starts up. And every so often I get fan email from an educator, and it’s always a treat.

Any insights or advice on self-publishing?
Self-publishing is a great way to put yourself out there. But when you self-publish, you’re not just an artist—you’re an editor, a publisher, a typesetter, a warehouse manager and a marketing rep. Among about eighteen other jobs that may arise unexpectedly. You’re functionally starting a business. If you want to get a lot out of it, you have to put a lot into it. In other words, if you want to get noticed, you’re going to have to put in a lot of work.

…And the rest is silence?
Don’t do that.

“Stick Figure Hamlet” is sold on Amazon.com for $18 and available online at stickfigurehamlet.com