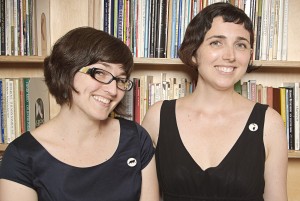 Jill Summers and Susie Kirkwood, sisters who are known in the lit community for their work as puppeteers, bring together design and text to evoke the senses. Their past works included shadow puppet shows at reading series, beginning at the now-defunct Dollar Store. “Jill was asked to read publicly for the first time and she was nervous to do this in front of an audience,” explains Kirkwood. “It was her idea to do a shadow show using her text.” They have since gone on to work on stop-motion animation projects, notably a book trailer for Cesar Aira’s “Ghosts,” published by New Directions.

Kirkwood comes from a graphic design background; she has designed for Columbia College Press and ACM magazine. Summers, who has a writing background, has had her stories broadcast on NPR and published by Ninth Letter, Knee-Jerk and Make Magazine among others; she recently won the Paper Darts magazine short fiction award. The two merge their talents to create visually appealing work. The fact that they are family might benefit this process. “We have ideas that are on the same wavelength,” explains Kirkwood. “It’s easy to go back and forth; it’s actually quite ideal.”

The two have perfected the art of knowing what characters represent the overall themes of the story;  they don’t simply boil down the text to single images, but instead choose ways to leave the audience with lasting impressions that associate with the text. “It gives text a new dimension,” says Kirkwood. Kirkwood will be designing a book trailer for Patrick Somerville’s newest novel, and Summers will surely be working closely on this project as well. The pair is busy preparing for the annual Printers’ Ball celebration—they’re sitting on the organizing committee for the July 20 event. (John Wawrzaszek)

Catch Jill Summers performing at Write Club July 3 at the Hideout, and then both will be performing at the Two Cookie Minimum two-year anniversary show at the Hungry Brain on August 1.