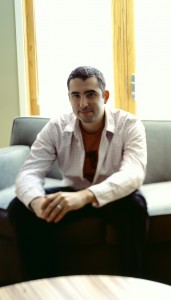 As books and comics get adapted into movies and television shows that rake in enough bank to set up studio heads with actual Uncle Scrooge-style money bins, there’s a terrible trend in crafting stories as Hollywood pitches. On the flip side is the desperate clinging to the nineteenth-century form of the novel that risks alienating readers who are not the upper-class audience with copious leisure time that constituted the literary readership back in the day.

Set in the final year of the twentieth century, the book follows Chicago twentysomethings Jack and Odile on a vendetta against boredom. By day they work in an office call center, hawking medical supplies over the phone. The rest of the time, they stage commando art gestures ranging from simple graffiti to dressing in bed-sheet ghost and riding the trains. It’s far from a quirky boy-meets-girl story, as both have their share of emotional baggage and damage, and the pair ends up on a path that takes them to unexpected futures.

What are you trying to do with this novel?
“Office Girl” is very much about motion. The book has very short chapters, and the reason it has short chapters is that I wanted a lot of white space in the book, and I would love someone to be able to read the book in one sitting. Over the course of the last decade I’ve really thought about “What can you do in a book that you can’t do in these other narrative forms? What can you do that you can’t do in television or film, or even a play or video games? What is a book, a prose novel, specifically built for?” Like there’s only a certain amount of complexity you can get into film because of the time constraints, and so my last couple of books were just really complex, with multiple characters and different time eras, and things like that. In the last ten or fifteen years we’ve seen that almost become the nature of the novel, that this is what we expect of our novels in the twenty-first century. We want them to be long and complex, and to tell us about the way the world works. And then I realized that there was also this purpose for a novel that’s almost the complete opposite of that: A book can capture these small, finite, everyday moments that are maybe not as epic as a film or a television show, but closer to the way I think that poetry works. There was something about the novel’s ability to investigate or explore intimacy between characters that you wouldn’t be able to replicate elsewhere. 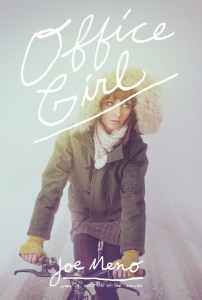 The characters bike almost everywhere they go in the novel; you could almost plot their courses on a map of Chicago. Their bicycles are almost extensions of themselves, and of course the cover features the image of a girl on a bike. Do you bike much yourself?
I used to. My wife and I used to bike every day when we lived up by Wrigleyville, just a couple blocks from the lake. Then when we moved it became really difficult to get to the lake from here and less fun; and then we had kids and the amount of time we could spend bicycling on our own just kind of evaporated. But there were a couple reasons why that’s a significant part of the book. In a purely aesthetic way, there’s something so lovely and youthful about a young woman on a bicycle that kind of sums up the way that I feel about my twenties. It was a small period and then it was over, so there was this real sense of brevity. And the thing that’s beautiful about a girl on a bicycle is that she’s cycling away from you, so there’s this real ephemeral quality to it. And the image of the bike too, it’s a real interesting one because it echoes all these other art objects, like Duchamp’s “Bicycle Wheel,” which he inverted and painted white, and through the book we were definitely playing with borrowing these images.

Speaking of those images and art ideas, I was wondering about what you get from talking about art through fiction writing instead of a conventional non-fiction form.
To be totally honest, the ideas that these characters have about art are ultimately less interesting to me than the characters themselves. Really the conversations they have aren’t necessarily my take about the art world; in some very specific ways they’re almost the complete opposite of my opinions about pop culture. Like, Odile has these really strong ideas that only art that a few people know about is important, that once something becomes popular it’s no longer interesting. It’s kind of laughable, but unfortunately a lot of people I know feel that same way. But over the course of the book, the other character Jack realizes that pop culture does matter, that even if we don’t want to admit it, it’s still something that gives us a unique common experience. 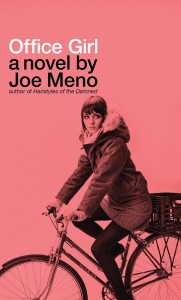 Office Girl is in many ways a “light” historical novel; I mean, it’s not hitting you over the head with period details from the nineties, aside from the mention of the Clinton impeachment hearings and the lack of cell phones and Internet. You were about the same age as your characters at the time the book was set. What did that period mean to you that you wanted to revisit with this book?
In my twenties I made hundreds of zines and worked with other writers. Kinko’s was kind of our Facebook in that way; if I had an idea or a story or something I’d get artwork from somewhere and make a zine. So I think there’s always been that impulse, especially for younger people—you have this idea and you want to get it out into the world. The difference is that now the technology supplants some of that action. I don’t know if it’s good or bad, it’s just different. I was able to try out a lot of things in the nineties, make bad art or bad zines or bad plays, and that was very helpful to me in learning how to be an artist, because it forced me—good or bad—to interact with other people, and I learned from that. I think in the end we were trying to make a book that would describe the experience of being young, being in love—being in love with the possibilities of art, and being completely confused and overwhelmed by the possibilities at the same time. While also appealing to people who aren’t that same age who might be older or younger. A book that describes what it’s like to be a person in love with art.

Joe Meno will read from “Office Girl” at The Book Cellar, 4736-38 North Lincoln, on Thursday, June 28 at 7:00pm with guests Adam Levin, Lindsay Hunter and Stephanie Plenner, with music by Nick Butcher and Jordan Martins. He will also read at The Empty Bottle, 1035 North Western, on Thursday, July 26 at 9pm with Patrick Somerville, Jac Jemc and Franki Elliot, with music from The Scotland Yard Gospel Choir and The Cloudbirds.