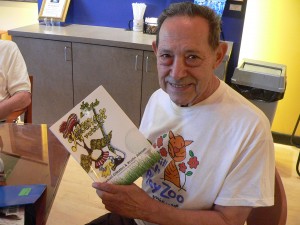 There’s a community of retired people at Mather’s Cafe in Norwood Park. Some take exercise classes, some take computer classes, some bide their time in the cafeteria. Some, like Sam DiMatteo, write books.

DiMatteo worked for twenty-two years as a mechanic at Procter and Gamble. His mentor once told him, “You’ll never reach your full potential here. You’re creative, and they’ll never let you express it.”

When he retired he got an associate degree and took creative writing classes. He took photographs and took up painting. He’s also a laughing yoga instructor at Mather’s.

One day, DiMatteo saw a news report about a goose that collected golf balls in a nest. He thought, “What does the flock think of this?” And he wrote, “They skip, they hop, they flip, they flop.” Then he thought, “What if one of those golf balls hatched?”

It eventually grew into a novel, “The High-Tech Gooseneck Putter,” about a gander named Sami DeMani, a take-off on DiMatteo’s name. In the book, Sami DeMani is a gander that plays golf, but is injured and coaches his son, Myles, who eventually wins the championship. DiMatteo says it’s aimed at kids from ages eight to seventeen and for golfers of all ages. “I wonder how many golfers this book will make,” he says.

There is also a character named Freda, whom Sami dates for a short time. She’s based on a volunteer at Mather’s Cafe of the same name. The real-life, human Sam and Freda dated for a few years, and he wrote her a poem. The two had an amicable breakup in 2005; Freda was too busy with her kids and volunteer work and Sam was too busy with his commitments. One of the poems he wrote after the breakup appears in the book as a scary story Sami tells. It begins, “The mood of the room was the gloom of a tomb \ the taste in the cell were from the dead of hell.”

DiMatteo has won an award for the book from LeadingAge, which exhibited it at their fiftieth anniversary “Celebrate Age” exhibit, honoring DiMatteo for publishing his first book at the age of seventy-seven.

In order to get the book ready for publication, DiMatteo reached out to Kristin Johnson, a freelance writer based in Hawaii. “I’m no good at dialogue, so I asked her to write some.”

Some other regulars at Mather’s also contributed to the book at DiMatteo’s urging. Joyce Nitsche contributed a poem that appears in the introduction. James Borgett made illustrations for the book. “He had his drawings of Mickey Mouse and Donald Duck posted in the cafe, and he couldn’t sell them because they were copyrighted. So I told him about my idea and he was enthusiastic about it. Now I can’t stop him,” said DiMatteo.

Borgett also made illustrations for DiMatteo’s next book, which he was working on when I visited him. In the book, aimed for children ages four to six, Sami’s love interest Polly is kidnapped by pirates but proves to be more than they can handle.

And what’s it all for? According to DiMatteo, it’s all the usual reasons, like fulfilling his desire to be creative and fulfilling his potential like his old mentor said. But more than that, it’s something more personal. “I was abused as a kid, and I want to make children’s lives happier.” (Robert O’Connor)