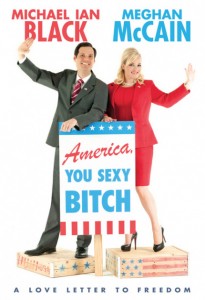 Done right, this is a good setup for some solid, low-stakes entertainment—a lighthearted look at the seriously flawed state of our political discourse.

Unfortunately, that’s not what happens here.  McCain and Black’s book is overlong, forced and built on red-blue stereotypes they don’t seem to realize they’re relying on. Most fatally, they don’t seem to see that the “common ground” they search for is not free of today’s hyper-partisanship, but of it—the mid-point between two false choices.

Both Black and McCain are likable people. Black is one of the few non-irritating participants in those “I Love the [Decade]” VH1 specials and is one of the people behind the extremely underrated show “Stella.” And McCain, daughter of the former presidential candidate, is the kind of conservative one wishes there was more of: young, cool and not totally insane.

Here, though, they are representing ideas. And instead of people, they come off as effigies, abstractions with faces.

On this trip, they do “conservative” and “liberal” things–they shoot guns in Arizona, listen to country music in Nashville, do karaoke renditions of Radiohead songs in Austin, etc., and muse over various political issues as they come up along the way. These parts can be interesting and are often funny (though rarely as much as they seem to think). Seeing how much liquor McCain and Black can put away in these various cities indeed shows us a different side of these folks.

But mostly, this is a frustrating endeavor. Black represents the liberal view, McCain the conservative, and they do the thing, and then emerge with a greater understanding of where the other side might be coming from.

The problem is, reality is not just the middle point between two contrasting views. Sometimes, one of those views is just plain screwy.

For example, McCain at one point gets angry at Black because he disagrees with the wars in Afghanistan and Iraq, “even though pretty much his only exposure to anything military was when he dressed up as a Ninja Turtle and toured the country as a teenager.” She tells about her many family members who’ve gone to war, as though that makes her opinion more valid, and then says: “I love the military and support the men and women who fight so courageously for our country so I can be here at home and write a book with an alternative comedian who is making my blood boil with his ‘give peace a chance’ hippie attitude.”

This parsing of her road-buddy’s argument is extraordinarily dim. First of all, the implication—a frequent conservative fallacy—that disagreeing with the reasons behind a war means you don’t support the military is offensive and untrue and a deliberate misrepresentation of Black’s position. Second, I fail to see how the Ninja Turtles figure into any of this—the TMNTs are mutants who live in the sewers of New York City, battling the Foot Clan and subsisting solely on pizza; as far as I know, they have absolutely no relationship to the United States Military. Finally, the assertion that a person must know someone involved in a war in order to intellectually disagree with the point of it makes zero sense. Say Mitt Romney gets elected in November: is he forbidden from ever ending the war because none of his five, equally well-coiffed sons have ever fought?

It gets worse: in the very next paragraph, she says, “Obviously, everyone knows that there was false information given to the American public to sell us on the war in Iraq. I’m sorry; it makes no difference at this point. We were there and we needed to fight the good fight.” No Meghan, I’m sorry–it does make a difference, as the whole false-information thing brings into question whether we are, indeed, fighting the good fight.

You can support the war or not. But do we really have to cater to the view that supporting it is Right and not supporting it Wrong, and that to suggest it was maybe not the best idea means you don’t have the utmost respect for our military? Do we have to find “common ground” with it? What about when McCain begins a section by saying, “I think anarchists are even stupider than atheists?” Should the debate over something begin by working backward from that?

I’m not trying to suggest this kind of hyperbolic buffoonery is exclusive to conservatives. I’d invite anyone who believes that to tune into Ed Schultz some night and see how capable of hackery liberals are.

But why should those be the only options?

I know this is Meghan McCain and Michael Ian Black. They’re not movers or shakers, they’re not commentators with the gravity of a Dowd or a Rich. They’re just funny people talking about healthcare in between pitchers of Bud Light.

But if they’re hoping to inject a little civility and compassion into the public discourse, they might try harder to transcend the contrived talking points we’ve all internalized, to delve more into the nuance of the issues they explore here with cable-news-simplicity. And to do that, they’ll have to realize that the answer does not lie somewhere in the middle of the political spectrum, but away from it entirely. (Eric Lutz)