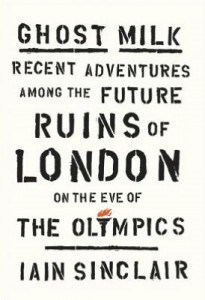 When the decision came down that Chicago would not play host to the 2016 Olympics, the city was divided between relief and regret. Four years earlier, when London was announced as the chosen city for 2012, British author Iain Sinclair cursed under his breath and started writing “Ghost Milk.”

The author of numerous works of dense Londonian psychogeography, Sinclair is known almost as much for his baroque encyclopedic prose as he is for his almost singular devotion to the prose-poetic survey of London and its environs. “Ghost Milk,” its topical affiliation signaled on the cover with the icon of a blazing torch, is one of many books on the summer Olympics but likely to be the only one to preemptively eviscerate the event’s infrastructural devastation.

The book is less about the nationalist contests of athleticism and more a study of the areas of London now gone, lost to the multibillion-dollar steamroller of the Olympics. In all of his works fictional and otherwise, Sinclair endeavors to chronicle the character and history of the city and its shifting miasma of identity. As its self-appointed biographer, he casts everything from shattered chapels to fresh-paved motorways as mythic heritage. Here though, Sinclair puts pen to paper with resigned urgency: the tenor of the work conveys his frustration that the people of whom he writes by now have been displaced, the sacred spaces autocorrected into super-modernist housing surrounded by fields of parking asphalt.

Stoking the ire of London’s Olympic committee is nothing new to Sinclair. His previous book “Hackney, That Rose-Red Empire” also raised issues with the emperor’s choice of haute couture just as the initial campaigns were being staged. In response, Sinclair found himself blacklisted from the Hackney arts and culture scene: no readings for grumpy old men.

For Chicago readers, the book stands as a cautionary tale of what-might-have-been, a lesson that perhaps gives new context to the city’s failed bid. Though with its topical prominence and American publisher the book may also introduce Sinclair’s style and domain to a new audience.

Who may be too late.

Whether his reputation and purview will be restored after the effects of the summer contests are experienced depends ultimately on how well the city can bear the stigma of a literary I-Told-You-So, but Sinclair himself may not indulge them in even that. He’s chronicled the life of London in his writing for decades, but will he become its eulogist? (Greg Baldino)

“Ghost Milk: Recent Adventures Among the Future Ruins of London on the Eve of the Olympics”
By Iain Sinclair
Faber & Faber, 416 pages, $28