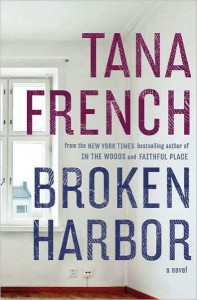 Tana French’s latest mystery, “Broken Harbor,” opens on the murder of a suburban family, the Spains. A husband and wife are viciously stabbed and their two children are suffocated in their sleep. Mick “Scorcher” Kennedy is assigned as the lead detective in this Irish mystery—he’s a hard-nosed, rule-book cop who believes, against all odds, in justice. Ever confident, Scorcher likes dropping pearls of wisdom like, “Here’s the part you never saw in interviews or documentaries, because we keep it to ourselves. Most victims went looking for exactly what they got.” His partner Richie is a rookie: young and instinctual, a bit like Holder in “The Killing.” Poor Richie has to bear the constant advice of Scorcher, who lectures him on everything from how to dress to how to interview subjects. Despite their inequalities of age, rank and social class, Scorcher and Richie begin to develop a true partnership, each carefully negotiating the exchange of trust the relationship requires.

Initially, the murderer seems fairly obvious, but a thorough search of the Spain’s suburban home and neighborhood reveals more and more complexities, keeping the reader guessing until the very end. Aside from writing a great mystery, French weaves in larger themes like conformity and economy, not to mention a challenge to Scorcher’s stubborn opinion that murdered people usually have it coming.

French’s storyline is in no small way influenced by the rise and fall of the Celtic Tiger—Ireland’s meteoric economic boom of the late nineties and early aughts, followed by a devastating financial crash and high unemployment. The Spains epitomize both sides of the economy’s rise and fall. They purchased their large home at the height of the housing bubble in an unfinished development that promised shops, schools and high-end gyms. When the bubble burst, they were left surrounded by half-finished houses and the effects of slipshod construction. After Patrick Spain lost his job, the Spains were unable to continue their SUV lifestyle, retreating more and more into their home, fearing the schadenfreude of their friends. Their circle of friends did indeed harbor some resentment over the perceived or real smugness of the Spain’s trajectory, as if they were checking items off a list: marriage, career, children, giant house near the sea.

As Scorcher and Richie pour over the wreckage of their home, looking for clues, Scorcher’s hard-nosed ideals start to unravel. How could this middle-class family have invited a murderer into their home? Scorcher has his own memories of visiting the seaside area years before the housing development was imagined, before he became a man of law and order: “The smell of the sea swept over the wall and in through all the empty window-holes, wide and wild with a million intoxicating secrets. I don’t trust that smell. It hooks us somewhere deeper than reason or civilization, in the fragments of our cells that rocked in oceans before we had minds, and it pulls till we follow mindlessly as rutting animals. When I was a teenager, that smell used to set me boiling, spark my muscles like electricity, bounce me off the walls of the caravan till my parents sprang me free to obey the call, bounding after whatever tantalizing once-in-a-lifetime it promised. Now I know better.”

French is clever, and Scorcher isn’t as one-dimensional as he first appears—Scorcher’s speeches are part of a fragile protective barrier he’s erected around himself. Scorcher’s past, too, contains an unsolved mystery, although one he’s less eager to solve. (Kelly Roark)