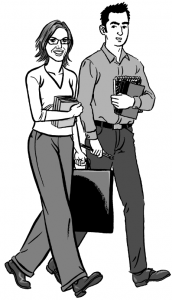 By Jessica Abel and Matt Madden. Courtesy of First Second

One of the things that struck me about “Mastering Comics,” and its preceding volume “Drawing Words, Writing Pictures,” was how there’s a similarity between the scheme of those books and comics themselves. They’re both visually laid out, and use words and pictures together to convey information. Was that something that your backgrounds as cartoonists played into when you were making the books?

Madden: There’s definitely overlap there in terms of visual storytelling. Comics exist on a continuum of visual narrative that includes graphic design and just plain drawing and illustration and how-to manuals and all that kind of stuff. They do share a certain language. I’m not sure that I ever kind of sat down and thought that we were working on a comic in the same kind of way that Scott McCloud did with “Understanding Comics” [an award-winning graphic novel about comics and graphic novels].

Abel: But we very specifically thought that we were not going to do that, because people would ask “Oh are you going to do it as a comic?” or something along those lines, and we thought “No, that’s not really the plan.” But it’s a good point, we’re talking a lot these days about visual narrative as a larger field than just comics, and the idea of graphic design as a way of organizing reading order and flow seems pretty relevant.

Madden: It’s a well-raised question at the beginning of the interview too, because they just announced a new MFA program at the School of Visual Arts, an MFA in visual narrative run by Nathan Fox, and we’re going to be teaching some classes in that program. The whole idea of that program is uniting comics, illustrated books, video games, anything that combines the visual and the narrative. 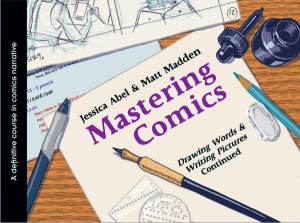 How did the idea for doing a follow-up to “Drawing Words” come about?

Abel: Well it wasn’t initially thought of as a follow-up, originally it was going to be chapters sixteen through thirty—

Abel: —huge book, and two-thirds of the way through it we realized that wasn’t smart, that wasn’t a good way to go about it. It would be too unwieldy, it would take us forever. So we decided to break the book into two, and of course we were able to do a whole bunch more thinking and working on it, on the concepts. So it changed a little bit, but conceptually it was all there… I think in some ways it became more different than it would have been if it had just been a continuation. If you think of them as [academic] courses, it’s like a different course; it’s got a different emphasis to it.

Madden: It definitely built on the first book, but it’s not just more of the same on a slightly higher level, it branches out from the first book. We talk a bit more about professional practice, we talk about story and writing, and creativity in a general sense that’s going to be of interest to more than just cartoonists.

In addition to your work as comic creators, you’ve both also taught in classroom settings. How different is it putting your ideas about teaching into a book as opposed to working through them live with students?

Madden: There’s definitely a difference between the back and forth in a classroom, and coming up with an activity or a lesson plan, and then putting it in real time in front of a bunch of students and you have three hours to get through it all—and that always changes stuff. And so writing for a book, on the one hand you don’t know what the final audience is going to be, so you’ve got to keep it pretty open to different uses, and also you’re not going to be using it yourself. One thing about writing it that was very different was that we had to really quantify and narrow down in very precise ways all the different  ideas and concepts and practical information we use in the classroom.

In the classroom you can say “It’s like this” and show them a slide on the wall or you take a student’s hand and guide them across the page. There’s a  lot of hands-on stuff that you can do visually or just by interacting directly with students and when we were doing the book we were like, “Oh my god, we have to actually put this in words and explain it in sentences that are well-formed and not just grunt at our students as they nod knowingly.”

Abel: We tried to clarify it. There are many many stages, you know, and before you teach whatever you’re doing, it’s somewhat unformed because it’s out of your own head. Your process can be a little bit vague. but as soon as you have to explain it to someone in the classroom what it is that you actually do and how does it work, there’s a second stage where you can explain it to someone in person but you can watch their faces and you can see if they’re getting it, and if they’re not I can walk around and explain it again in different words. But when you’re writing it you have to predict all that stuff, which is one reason why doing this stuff after teaching for a number of years is really helpful because we sort of knew the kinds of things that students would be likely to have issues with.

Madden: Right, it’s also the reason that “Mastering Comics” was harder to write than “Drawing Words,” because it was generally more advanced stuff, and some of it was very hard to kind of verbalize and come up with illustrations to help explain all the different topics we were covering.

A lot of what we’re talking about here reminds me of what Art Spiegelman said at the Comics: Philosophy and Practice conference [held at the University of Chicago this May], that comics weren’t words or pictures but a process that happens in your mind.

Madden: That approach as a whole is the thing that we were most passionate about, and “Drawing Words” is the first book we believe that really teaches comics almost like a language. When we were originally planning it I was conceiving of it as like a language textbook, where you’re learning how to understand and speak a language. We wanted to do this very systematic textbook that would walk you through all these steps and you’d learn how to tell stories and how to lay out a page. We’re also trying to address, like, what are nib pens and how do you use them, and how do you tell one from another, that kind of stuff, which can seem kind of dry, but as teachers we find that’s what people are really hungry for. Like “Yeah, I know what kind of story I want to tell, I just wanna know how do I do it?”

Abel: I wouldn’t wanna oversell the idea that it’s about technical stuff, but those felt like the big secrets when I was learning myself. Those were the things that I wanted to put my hands on, that information.

Matt Madden presents “Verse, Stripped,” a talk on comics and poetry at the Poetry Foundation, 61 West Superior, August 1, 7pm. He will conduct a mini-seminar and signing at Chicago Comics, 3244 North Clark, on August 2, 5pm-8pm.