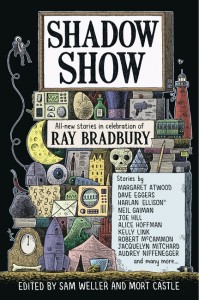 On July 24, a party was held in the lobby of the Inland Steel Building to celebrate the launch of “Shadow Show: All-New Stories in Celebration of Ray Bradbury” on Chicago soil. The book, edited by Bradbury biographer Sam Weller and polymath Mort Castle, had officially debuted at the San Diego Comic Con with contributors Margaret Atwood and Joe Hill, but on that Tuesday the book’s Midwestern roots were trumpeted. On hand were the editors themselves, proud as parents, as well as a roster of Chicago and Midwest literary talent: Joe Meno, Bonnie Jo Campbell, Audrey Niffenegger, Jay Bonansinga and Bayo Ojikutu—all of whom had penned original stories for the volume.

Nursing one of several beers enjoyed that night (less for the alcoholic buzz than for something cold to wipe across my brow in the summer heat), I was surprised to see an artist friend in the audience. They’d walked in off the street, believing the party to be a reception for the collection of local club posters that decorated the space.

I explained that it was actually for “Shadow Show,” pointing to the stack of copies being gradually whittled down over the evening. Taking a look at the list of authors in the anthology, my friend was impressed, but also remarked somewhat wryly, “Huh, they got that turned around pretty quick.”

The inference was of course that the book had been packaged to come out in memoriam; Bradbury had sadly passed away only a month and a half before. Not an unkind idea, but one that requires a romantic and Harry-Potterian vision of how publishing works. No, the book had been in the works for some time. It just had come out with either excellent or terrible timing.

Like all intersections of love and death, it was a combination of the two.

The collection first came to my attention in the fall of 2010, while taking a class on Bradbury from Weller in the Fiction Writing department at Columbia College Chicago—at the time the only college-accredited course on Ray Bradbury in the country. The class was something of a joy; there are worse homework assignments than reading Bradbury stories. And who better to teach than a man who was not only a lifelong fan of the author—his father had read “The Illustrated Man” to him while he was still in his mother’s womb—but who had for the past decade visited and corresponded with the man himself.

(“What did Bradbury mean by that?” “Good question, I’ll ask him next week.”)

After the pending existence of the book had been mentioned at the end of class, I remarked to Weller that with this new book he had unknowingly composed a trilogy: His first book, “The Bradbury Chronicles,” was a portrait of the author as Weller saw him. The interviews he drew that book from were later edited into “Listen to the Echoes: The Ray Bradbury Interviews,” which framed Bradbury’s life, works and ideas as Bradbury himself saw them. Now with this third book, composed of original stories—no pastiches, no sequels—would show us Bradbury as he is known by the authors inspired by him.

(It should be said though, that while Weller is the more publicly recognized of the two editors, it was his co-conspirator Mort Castle who initially conceived of the idea and offered it to him with the option that he could do it himself or that they could partner on the deal. Castle, with the glean in his eye of a benign carnival huckster, and Weller, eternally a plucky Midwestern lad, even if he’s a husband, father of three and tenured professor, could easily have stepped out of one of Bradbury’s thousand-and-one tales.)

Originally titled “Live Forever”—after a childhood encounter Bradbury had with a sideshow wizard named Mr. Electrico who knighted the Waukegan boy with lightning and told him to “Live Forever!” —the collection grew in the telling.

“Gaiman’s doing a story,” Weller told me that day after class.

“We got Dave Eggers.”

“Guess what? John McNally sent in a piece.”

“Margaret Atwood’s going to do something!”

In the shadowy confines of Weller and Castle’s respective offices, the book grew in secret. The talent, a mixture of genre and literary authors, raised a number of excited ponderings in the heads of everyone who read it. Just what would an Audrey Niffenegger Bradbury story be like?

Bradbury himself contributed the foreword to the book; having read the collection before his passing and approved of it with verve and gusto. That he passed before the book’s release and did not live to see the response of readers worldwide is a sadness, and part of the greater sadness that one of the greatest fireworks in the candle factory of American letters has finally gone out. Weller found himself on that terrible Wednesday in the position of being everyone’s go-to guy for a quote or comment on the author’s passing. The price for being the man’s herald meant little time to mourn for a fallen friend. Though Bradbury’s passing may certainly have added to the attention garnered by “Shadow Show,” it’s certainly not a marketing scheme anyone would have ever chosen.

And yet, for every new reader who picks up “Fahrenheit 451” or “Something Wicked This Way Comes” in the wake of the great writer’s passing, or who follows their favorite author’s tribute story to the original seed of inspiration, he lives again. Weller has said that this is his last Bradbury book, that it’s time to move on to his own tales, but Bradbury will never leave him; will never leave us.

Not until only the scorched shadows of humanity are left on the wall.

Although I could see why the writer of this review made the comment about drinking multiple beers, I would like to point out that it could be taken the wrong way. Sorry that isn’t really related to the book, but that did trouble me about the review.